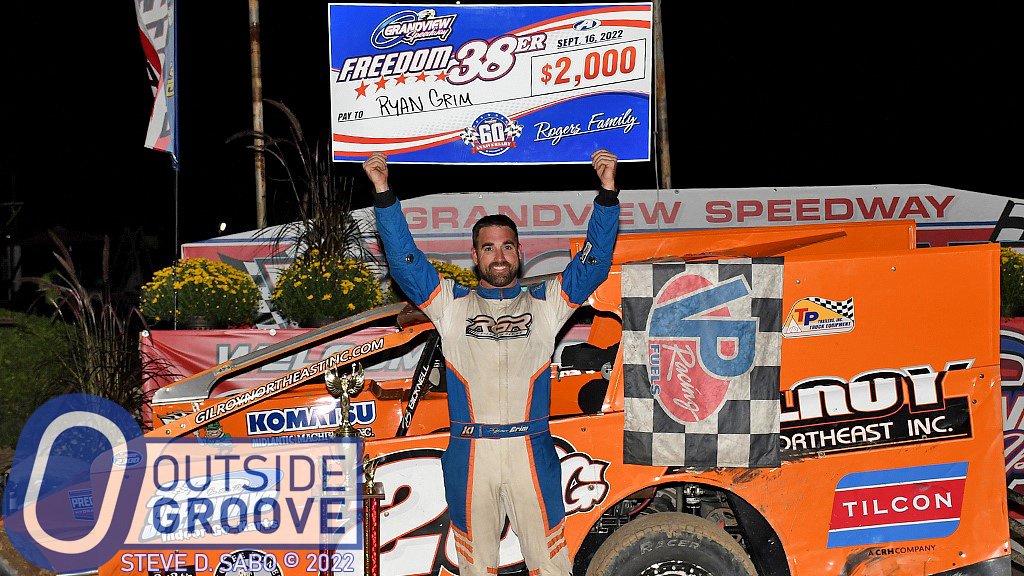 Ryan Grim typically only works on the No. 20G sportsman modified. However, he borrowed it for last weekend’s Freedom 38er at Grandview Speedway in Bechtelsville, Pennsylvania. With it, he won the race.

“The car is not usually raced at Grandview Speedway,” Grim, of Laurys Station, Pennsylvania, said. “So, I asked John [Gilroy, who owns the car] and Danny Buccafusca [who drives it], if I could take it out for the 38er. They told me to go for it.”

For the past 17 years, Grim has competed in the modified class at Grandview Speedway. Two years before that, he raced regularly in the sportsman class. Earlier this season, he raced both divisions in the midweek Thunder on the Hill Racing Series at Grandview Speedway. With years of experience behind the wheel at the Bechtelsville, Pennsylvania, oval, Gilroy and Buccafusca wound up putting a solid driver in their ride.

Grim topped more than 60 drivers to qualify on the pole for the Freedom 38er. The feature wasn’t a cakewalk, though.

“I lost the lead on the start,” said Grim. “The bottom of the track was wet and I slid, losing traction. Jordan Henn got by me, but I fought back to pass him.

“On another restart, Cole Stangle got by me. I fought back again — I was in a battle more than half of the race. I heard it was an exciting race, but I didn’t see it — I was focused on my driving.”

(For more on Henn, read “Jordan Henn: Ending the Season on a High Note”. For more on Stangle, read “Cole Stangle: Wrestling and Racing”.)

Grim won with a car from Bicknell Racing Products that dates back to 2013.

“The [car] just works — no matter which track it is at,” Grim said. “When I set up a car, I keep everything as basic as I can. Getting fancy usually racers get into trouble. I stay away from ‘trick,’ ‘new,’ or ‘different,’ when it comes to setup.”

After the win, Grim received a warm congratulations from the car’s regular driver.

“Danny was more excited about me winning the 38er than I was,” said Grim. “Next season, I’ll still be maintaining the car and we will be focused on winning the championship at Big Diamond [Speedway in Pottsville, Pennsylvania].”

“My team is underfunded,” Grim said. “I have three wins in my career. I’ve learned to do a lot with a little. I’m racing with guys who have raced as long as I have been alive, and I’m 43. It’s hard to compete with experience and money.”

Nevertheless, if the Freedom 38er is any indication, Ryan Grim, given the right opportunity, can give those more experienced drivers, better resourced teams a run for their money.