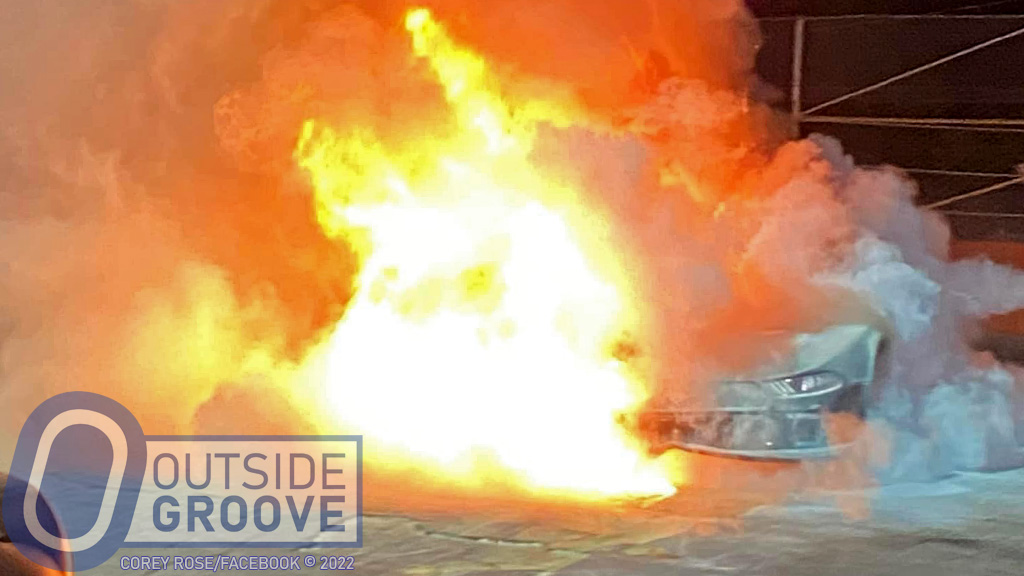 “All I can say is that I’m glad that the good Lord above still wanted me here,” Rose, of Asheboro, North Carolina, said. “I’m absolutely thankful to be with my wife Savannah, my two-year-old daughter Adaline, and our baby who is on the way.”

Rose finished fifth in the first feature of the night. In the second twin, he was passing for the lead when a competitor’s car got underneath his rear bumper cover coming off turn two.

“There was some Speedy Dry on the track, and that got me sideways,” said Rose. “As the other car turned under me, my car faced the outside wall. I locked the brakes. To go back-end first into the wall, I gassed up, but a split second later, my car hit the back gate, and went into the concrete wall two feet outside of the track.”

The impact crushed the rear clip of Rose’s four-race-old chassis from Hedgecock Racing.

After the car came to a rest, Rose’s instincts kicked in.

“I got out of the car as fast as I could,” said Rose. “The car was immediately on fire. I knew I had 20 gallons of race fuel on board. I had an onboard fire extinguisher system, but in the rush to get out I did not have the time to pull the pin.”

Rose sat in a ButlerBuilt full-containment seat, with a brand-new Simpson five-point harness. He wore a Stilo helmet paired with a Simpson Hybrid Pro head-and-neck restraint.

“My only injury was burned hair on my neck,” Rose said. “The safety gear did its job. I’m fortunate that I wasn’t injured at all by the impact and was able to escape the car in seconds.”

“We’ll have our work cut out over the winter,” said Rose. “The car will need a new rear clip and body. The fire burned everything electrical, and melted the belts off the motor. The transmission tail housing was busted, and the rear end tube bent.”