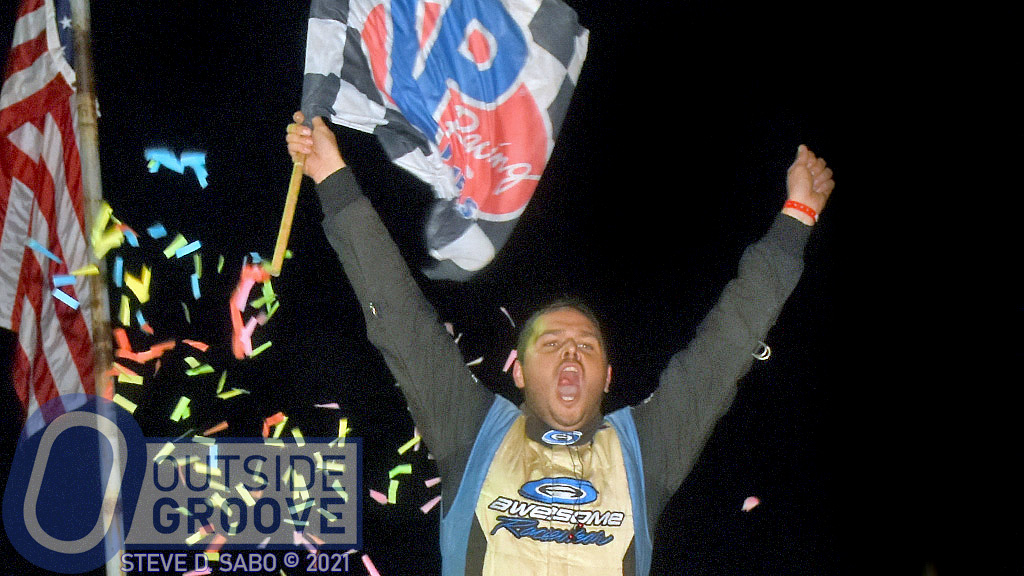 Jordan Henn struggled this season with his modified. However, he ended his season on a high note by winning the Freedom 38 sportsman race at Grandview Speedway in Bechtelsville, Pennsylvania.

“I didn’t get a full season of racing in this year,” Henn, of Kutztown, Pennsylvania, said. “We had mechanical failures early in the season. We blew three rear ends — and a had a couple of engine issues. They left me feeling deflated. On the other hand, my wife, Kristen, gave birth to our second daughter, Kennedy, on August 23, which was very exciting for us.”

Henn came close to winning the Freedom 38 before. In the same year he won the track sportsman championship, he led the 2016 edition until the final two laps. Henn got caught up in lapped traffic, relinquishing the lead to eventual winner Brandon Grosso.

“I was mad at myself for being caught in lapped traffic,” said Henn. “The 38er is one of the races I really wanted to win.”

Henn started racing modifieds in 2017, and then left the sportsman class the following year.

“I have struggled in the modified division,” Henn said. “I missed the sportsman division, especially when the Freedom 38 came around — I wanted that win.”

Last season, Henn posted a message on Facebook seeking a ride for the Freedom 38.

“Brothers Tyler and Cody Reber, who race at Big Diamond Speedway [in Pottsville, Pennsylvania], answered my request,” said Henn. “I didn’t even know them — and they offered me the car Tyler drove. We had a good run [in 2020, but] the right-rear axle came out of the cover. This year, they offered me another chance to drive their car in the 38er.”

After a dark cloud seemed to follow Henn around the track through this season, he found Lady Luck at this year’s Freedom 38.

“Things went well — having a redraw to get the pole position in a standout field helped,” Henn said. “We put ourselves in position for the win.”

Now, Jordan Henn can end the 2021 season knowing he finally earned the win of a race he sought for many years.

“For me, winning the 38er was completing unfinished business,” said Henn. “I wanted to win the race in 2016 badly. After an up-and-down year, I needed the win to build my confidence, and it did that.”