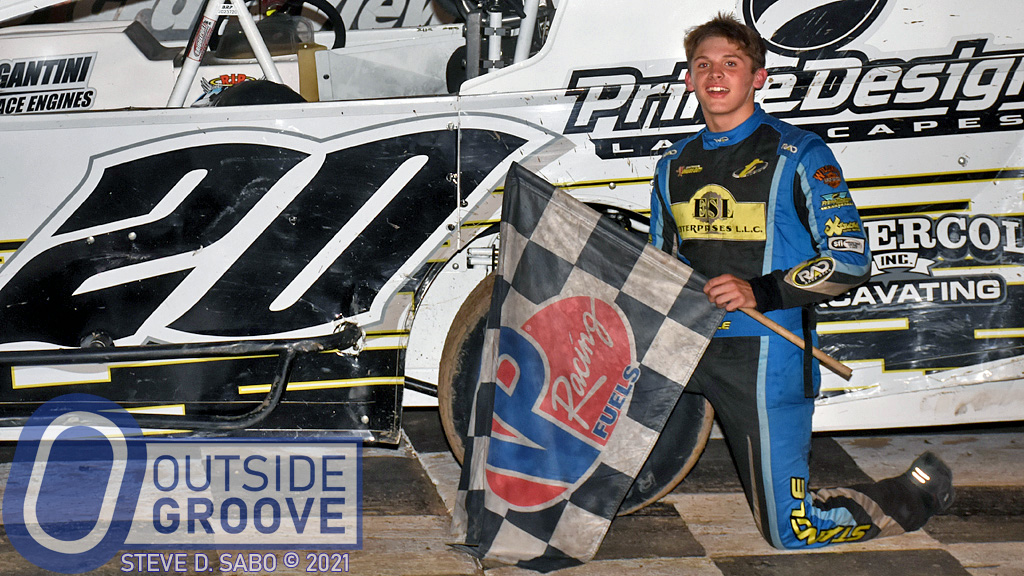 Cole Stangle took home his first sportsman feature win last Saturday at Grandview Speedway in Bechtelsville, Pennsylvania. However, Stangle is no stranger to success. He won the New Jersey state wrestling championship as a 160-lb. eighth grader. Stangle said he applies what he learned grappling toward steering a race car on the dirt oval.

“Wrestling is a mental game,” Stangle, 14, of Neshanic Station, New Jersey, said. “Having a wrestler’s mindset is a big factor in being a contender on the racetrack.”

Case in point — Stangle competes against many older drivers, who have as many years of experience as Stangle has in age.

“I’m racing against the drivers who I look up to,” said Stangle. “That is where mindset plays a big factor. They’re bigger, tougher racers — and I don’t let that bother me. I’m focused on driving.”

Stangle started racing in quarter midgets at five years old. He moved into the sportsman class at New York’s Accord Speedway when he was 10 years old.

His father, Ed Stangle, used to race late models at the defunct Flemington Speedway in New Jersey. The elder Stangle said wrestling has helped his son many ways, but one aspect in particular stands out.

“He’s been wrestling as long as he has been racing,” Ed Stangle said. “He’s able to cope with the ups and downs in racing because of his training in wrestling.”

This year has presented challenges for Stangle.

“We had a lot of dumb luck this season,” said Stangle. “I’ve raced three-wide for second with Brian Hirthler and Adrianna Delliponti, and went into the marbles. I had a body panel cut down a tire in the Firecracker 40.”

The win last Saturday did not come easy. More than 30 cars vied for a starting spot for the 26-car, 25-lap feature. However, going through those hard nights made the victory ever so satisfying for Cole Stangle.

“My first win took a big load off of my shoulders,” Stangle said. “It was exciting and big relief. Finally, everything went smoothly and we won.”

Outside Groove Note of Transparency: Corrected the name of driver Adrianna Delliponti (2022-07-18).