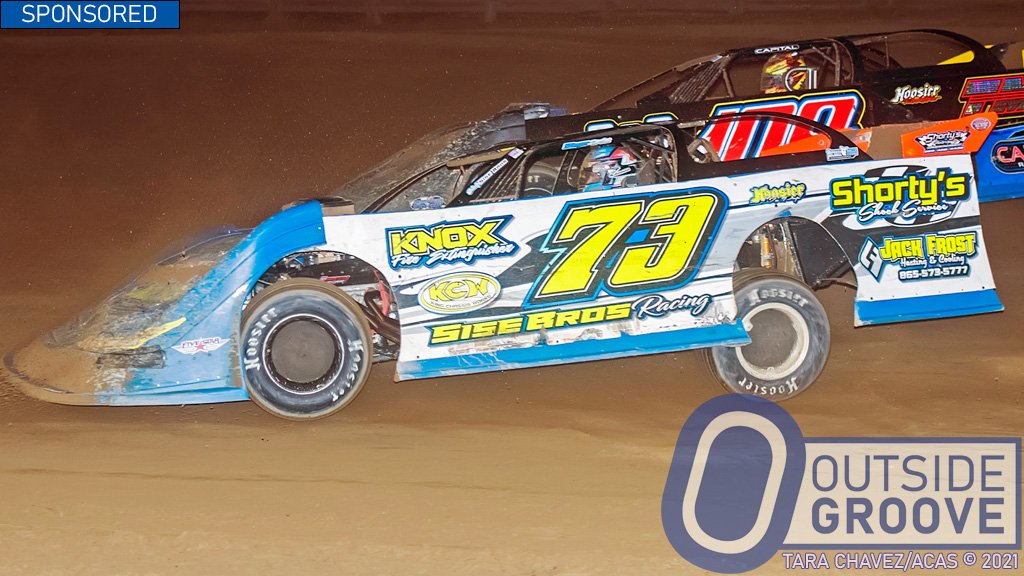 Throughout most of the 2020 season, three drivers — Trevor Sise, Tyler Arrington, and Eli Beets — duked it out for the American Crate All-Star Series presented by PPM championship. The points battle came down to the season finale. In the end, the driver who placed the most in the top five, despite several bad finishes, won the title.

Lap One of the Season

Tyler Arrington started the season with a brand-new car from Longhorn Chassis. He won the 2019 championship with an older Longhorn, but he couldn’t get the handle on the new ride.

Meanwhile, Trevor Sise kicked off the year with a win during the season opener at Volunteer Speedway in Bulls Gap, Tennessee.

“I felt we had the chance to win, pretty much anywhere we went,” said Sise, of Knoxville, Tennessee.

Arrington switched chassis manufacturers, returning to Rocket Chassis, the brand he first started having success with in 2015 to 2016. He debuted the car on August 7 at Crossville Speedway in Tennessee.

“The first couple of races with [the Rocket Chassis] car, we struggled,” Arrington said. “But, after that, we took off and started running good.”

On June 5, while leading the race, a lift bar broke at Crossville, ending his night early and placing him 13th.

Then on July 3, at Beckley Motorsports Park in West Virginia, Sise charged through the field to the top five and got into a wreck, relegating him to a 15th-place finish.

The following night at Volunteer Speedway, the site of his season-opening win, Sise led the field and as he came to the white flag his driveshaft broke at the U-joint. He ended up 15th.

“I wrecked a car at [Volunteer Speedway] … completely wiped it out,” said Beets, of Knoxville, Tennessee. “So, we ended up having another car built to finish out the season.”

Some might consider Labor Day weekend as the critical point of the season. On September 5, the American Crate All-Star Series visited Lizard Creek Speedway in Hanover, West Virginia. Sise and Beets — both with loads of experience on Eastern Tennessee, heavily banked, relatively wide clay ovals — never saw the track before.

“That thing’s like a paperclip,” Sise said of Lizard Creek. “It’s really slick and banked like a parking lot.

Yet, the two had two dramatically different experiences.

“That’s the first time he had ever been there, and he won,” said Arrington of Sise’s performance at Lizard Creek. “That was pretty big. I didn’t expect him to run that good over there.”

Beets qualified 14th. The Lizard then bit Beets, where a wreck at Lizard Creek prevented him from making the following race, a $10,000-to-win event at Wythe Raceway in Rural Retreat, Virginia.

“That was the point where we were like we were out of running for the [points] lead,” Beets said. “Third was the best we’re going to do.”

Meanwhile, Arrington finished fifth at Lizard Creek. The next night, he won at Wythe, Arrington’s home track. While Arrington was the 2019 champion, Wythe marked his first-ever series feature victory.

“To win it up there was a big deal to me,” said Arrington. “That’s where I first started racing cars.”

Sise encountered his worst finish of the year at Wythe. He started 18th, moved up to the top 10 before he wrecked out the race, placing 19th.

From Wythe on, Trevor Sise and Tyler Arrington were locked in a battle to the end for points. It came down to the season finale, a two-night event at Smoky Mountain Speedway in Maryville, Tennessee.

“Our motor was down and the racetrack was hooked up,” Sise said. “We changed some stuff for Saturday. The racetrack slowed down a lot — a little over a second slower.”

“It was fun to be involved in it,” said Arrington of the points battle he had with Sise. “He had really good runs. If he would have been able to finish two or three races that he went out [of early], we wouldn’t have had a points race. That’s what made the difference.”

Beets, while out of the points chase, began winning races outside the series. Then he won season’s last points-paying race at Smoky Mountain Speedway.

“That was the cherry on the top [at Smoky Mountain],” Beets said. “That was the best way we could end the season.”

This Saturday, January 23, the American Crate All-Star Series presented by PPM honors its champion, Trevor Sise, and points leaders at their 2020 season banquet at Rothchild Catering and Conference Center in Knoxville, Tennessee.