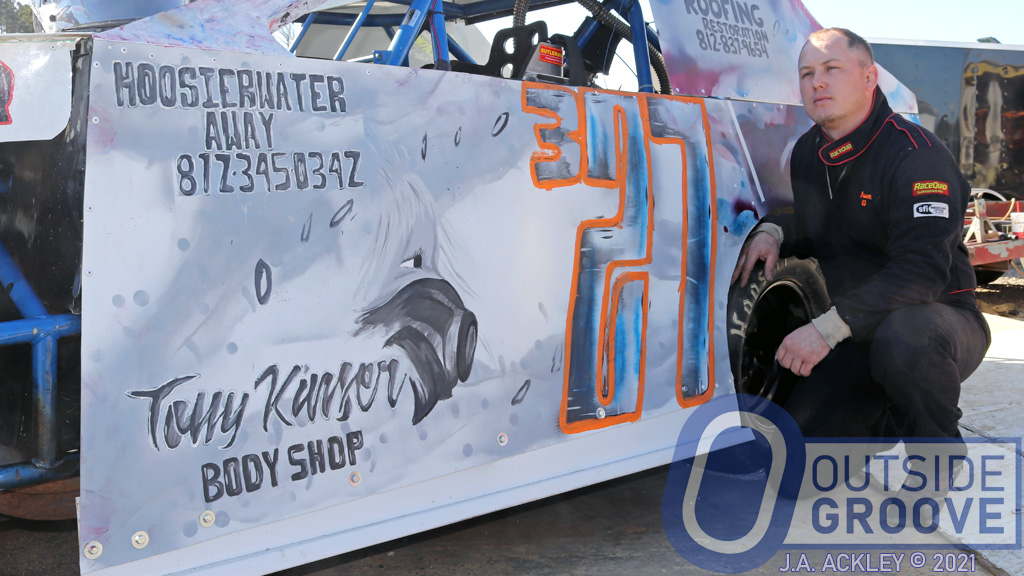 The modified raced by Dustin Bruce carries a paint scheme unlike many others. It features art of various characters from anime, aka Japanese animation, on an ethereal-looking background.

“[I wanted] to be different,” said Bruce, of Bloomington, Indiana. “It’s all done by hand with spray paint and pastels, with a clear-coat finish over it.”

Bruce typically runs modifieds with your friendly neighborhood webslinger, Spider-Man, on the car. He does so because of his seven-year-old son, Mason. Bruce’s number, 327, references his son’s birthday.

However, Bruce wanted something extra special for last fall’s Mod Mania at Tri-City Speedway in Pontoon Beach, Illinois. The event awarded a best-appearing prize, which provided Bruce with incentive to have a new, unique paint scheme.

Bruce enlisted help from a friend of an employee at his business, Bruces Lawn and Tree. The artist, Drake Dragoo, uses shoes and more traditional media as his canvas for various creatures, anime and comic-book characters, and designs.

“He had never seen a race car before,” Bruce said. “I take him the body panels [and] laid them out on the table, in the order they went. He did the whole car in three days.”

Dragoo, with no experience in racing, made detailed designs on the doors, until Bruce informed him of the hard life body panels have in the sport.

“He was like, ‘What do you mean?’” said Bruce. “[I told him,] ‘There’s a good chance this might get wrecked. It’s not like drag racing — we race side-by-side.’ I then shown him a couple of videos.”

So far, after four races Bruce has kept the car clean. In the meantime, fans have shown Bruce their appreciation of the paint scheme.

“I don’t know anime,” Bruce said. “A lot of people will walk up and name the characters on the car.”

It seems the fervent followings of anime and dirt-track racing cross over. Dustin Bruce is considering painting his second modified with a similar theme.