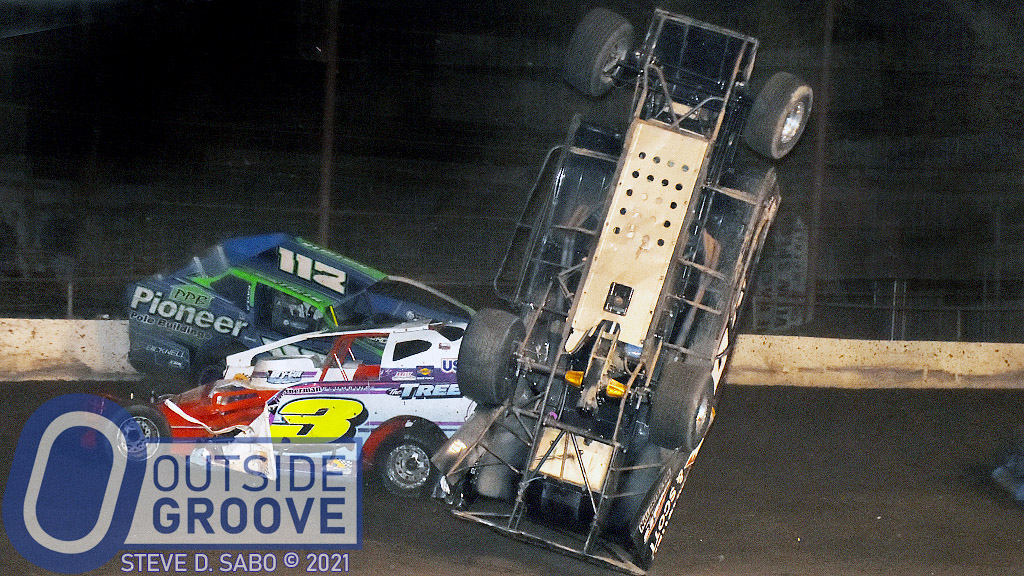 Craig Whitmoyer, aka “The Hook,” refused the hook to tow away his car. He had just flipped during the modified feature at Grandview Speedway in Bechtelsville, Pennsylvania. Instead, Whitmoyer asked the safety crew to turn his car over. He then refired the car and continued on. The crowd went wild.

“About halfway through the feature, another car hit an infield yuke tire, and then shot across the track in front of me,” Whitmoyer, of Hamburg, Pennsylvania, said. “I hit his front end and that launched me end over end. My car spun around on its back and landed upside-down on its roof.”

Whitmoyer, who started racing in 1995, owns more than 60 feature wins and four track championships in the sportsman class at Big Diamond Speedway in Pottsville, Pennsylvania. The veteran has endured four flips in his career.

“As for my career wrecks, this one wasn’t awful at all,” said Whitmoyer. “I had one flip where my eye was swollen for months. I wasn’t hurt a bit in this flip. Flipping is scary — you have a helpless feeling. When you start to take off there is nothing you can do but sit there and go for the ride.”

Whitmoyer sat in a Kirkey full-containment seat, with a five-point Simpson harness. He wore a Zamp helmet, but no head-and-neck restraint. Whitmoyer races a 2017 chassis from Bicknell Racing Products. The car suffered a bent front axle and extensive sheet-metal damage. Whitmoyer finished the feature in the 22nd spot.

Craig Whitmoyer received his nickname “Hook” because he drives with one hand. Before he started driving race cars, he lost his right hand in a work-related accident.

“I have a hook for a right hand, and steer with my left hand,” Whitmoyer said. “When something like that happens, you have to make do with it. You can’t sit around and think what could have been. I’ll never know whether I would have been a better driver or a worse one if I had two hands.”