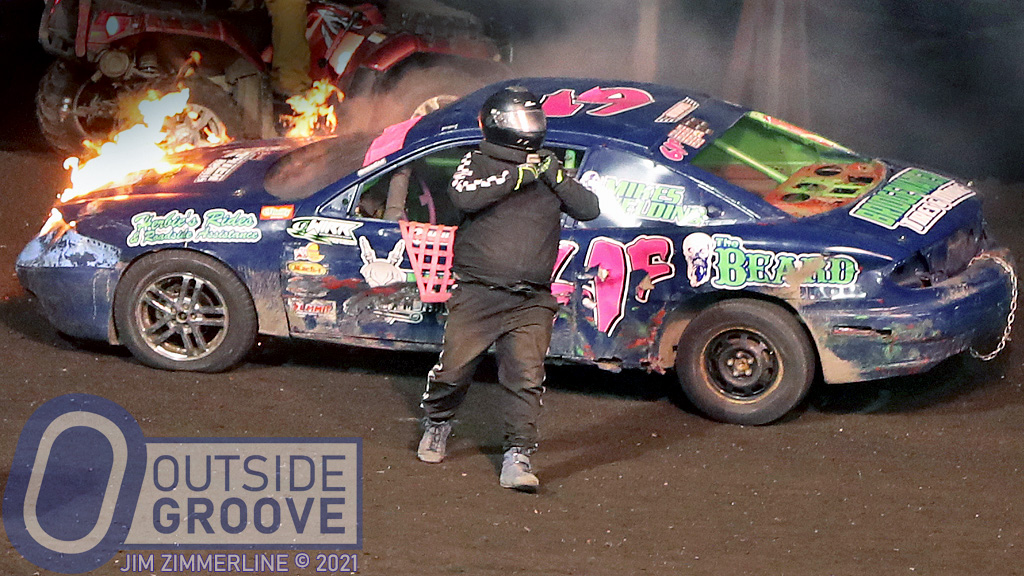 Tyler Fiebelkorn saw his hopes of winning the IMCA Speedway Motors Super Nationals go up in flames during the Big Dance for sport compacts last Tuesday. The incident occurred while he battled for 10th position at Boone Speedway in Iowa.

“I saw the fire under my hood going down the frontstretch,” Fiebelkorn, 34, of Stuart, Iowa, said. “I turned up the track, stopped, and popped my belts. Just then another car ran into my car. I still managed to get away from my flaming car without suffering any burns.”

Wednesday night, Fiebelkorn said he was still sore from the impact. He sat in a Kirkey seat, with RJS Racing Equipment belts. He wore a Zamp helmet, a neck collar, Finishline fire suit, Alpinestars gloves, and RaceQuip shoes..

“The other racer was trying to stop — it was just a freak accident,” said Fiebelkorn. “The fire was most concerning to me. It was caused by a leaking fuel rail.”

Fiebelkorn steered a 2004 Pontiac Sunfire, with a 2.2L GM Ecotec engine. He built the car out of his shop, KBM Motorsports and Automotive.

“There is an inherent problem with the metal cracking where the fuel line connects to the fuel rail,” Fiebelkorn said. “There is a solution — use a threaded connector, the kind used for the fuel lines in the hobby stock and stock car divisions. Those connectors are not allowed, if you go by the rulebook. I broke a fuel rail in the Prelude [to the Super Nationals] race, and three races later I broke its new replacement in the Big Dance.”

Tyler Fiebelkorn currently leads the IMCA Iowa state point standings by 170 points. He looks to return to action for the final three weeks of the season to secure his second consecutive state title.

“I’m at the Super Nationals to help friends this week,” Fiebelkorn said. “Come Sunday, I’ll be working on my car. It will need new wiring and a fuel system, but the engine should be fine. By Monday, it should be ready to race again.”