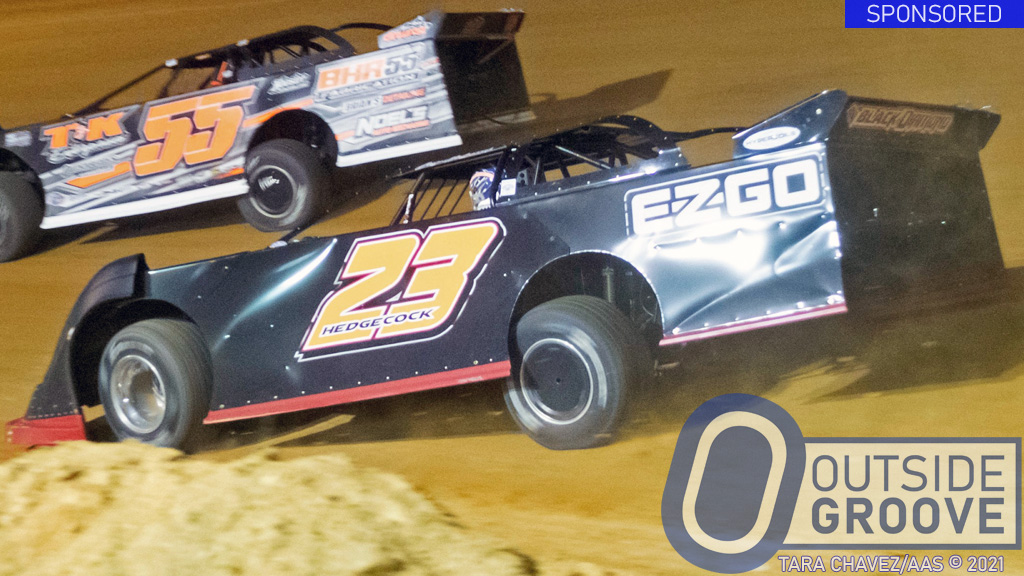 Cory Hedgecock clearly knows the path to victory lane, regardless of what he has under the hood of his late model. This year, he has won in three classes — steelheads/limiteds, 604 crates, and supers.

“We’re maybe not the best at [each division], but I feel we’re decent in all three of them,” said Hedgecock, who works at his family’s Eagle Racing Engines in Knoxville, Tennessee. “If we concentrated on one [class], we would be better. But, we’re trying to sell motors [at Eagle Racing Engines], so we try to be the best at everything.”

Hedgecock said the different divisions require him to take different approaches as a driver and for setups. However, he desires the same feel from his race car across the classes.

“I make the car look the same, attitude-wise,” Hedgecock, 29, of Loudon, Tennessee. “If I’m really free and I can’t get into the corner as good as I want to, I’ll just slow down to make the car look like [I want it to]. I want it to be so much back-steered, as far as where my hands are clocked. I’m either speeding up or slowing down to keep my hands in the same spot.”

“I’ve been with Rocket since day one,” said Hedgecock. “It took us a long time … to figure out what [the Black Diamond chassis] want.”

Cory Hedgecock and his team seemed to learn what the new cars needed far quicker than they give themselves credit for. Since the end of May, he has not finished worst than fifth, with the exception of one DNF (where they pulled off due to track conditions). However, Hedgecock started many of those races from the back of the pack.

Hedgecock said his qualifying woes stem from still adapting to his new chassis.

“It’s a different feeling, and it’s kind of messed me up a bit,” Hedgecock said of his new race cars. “They’re a tight race car, which is why we struggle early on. We haven’t figured out how to get them good on a fast racetrack. But, as soon as it starts slicking off, we get fast, because it has so much traction.”

On Friday, August 6, he’ll compete in the steelheads for the $10,037-to-win Dylan Kennedy memorial race at Wartburg Speedway.

Cory Hedgecock has modest expectations for qualifying, but has high hopes for when the checkered flag flies for the features.

“I’m not worried about making the race, by no means,” said Hedgecock. “We can’t get too far behind. If we can start in the top 10 or so, that’s all I ask for, because we race so good.”