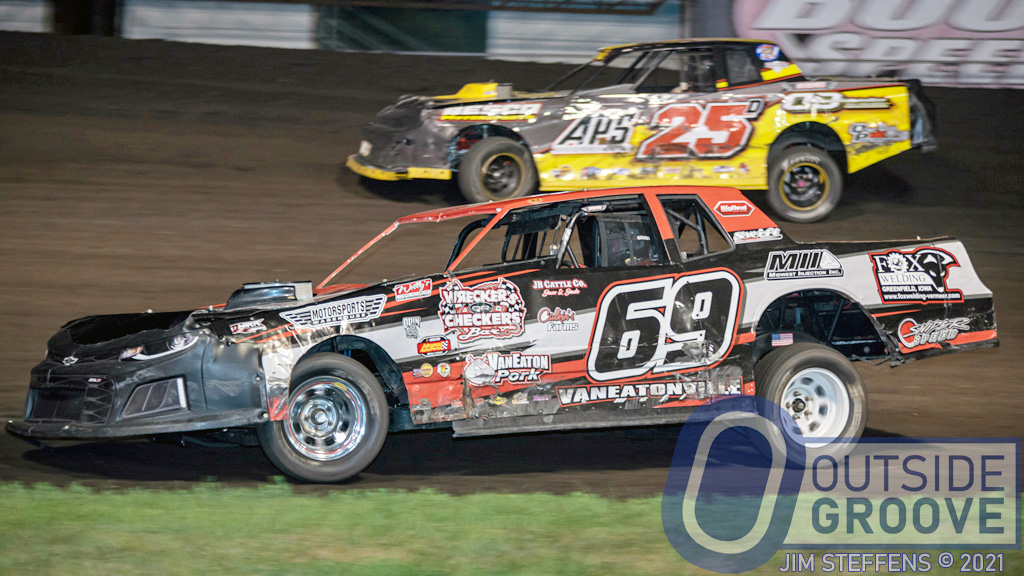 This past weekend, Johnathon Logue (69) won his 71st feature, but it was his first in an IMCA stock car. It occurred during the Hunting with Heroes Salute to Veterans miniseries stop at Boone Speedway in Iowa. The victory came in part due to Ricky Thornton Jr. Thornton vacated Logue’s stock car ride, owned by Todd and Traci Van Eaton, of Orient, Iowa, after last season to concentrate on dirt late models.

“I’m so thankful that [Thornton] recommended me,” Logue, of Boone, Iowa, said. “It’s the same car he drove.”

“The weight difference between both types of cars is the biggest thing,” said Logue of stock cars, which roll over the scales at a minimum of 2,950 lb., as compared to a sport mod at 2,500 lb. “With stock cars having more horsepower and weighing so much more than a sport mod, I felt like I was sitting in the trunk of the stock car.

Logue has raced sport mods since 2013. He has no desire to move into the modified class.

“I like running an open motor,” Logue said. “With modified now, you pretty much have to run a crate engine.”

Johnathon Logue is taking over his father John Logue’s racing operation as he retires this season.

“We were partners in my cars,” said Logue. “I bought my dad out. I’m driving a Rage Chassis house car now. We’re turning the same lap times [in the sport mod] as the modifieds do. I have two young children now, and I can’t justify spending $20,000 to $25,000 to field a modified that turns the same lap time. I can race anywhere now and be competitive in the sport mod or stock car divisions.”