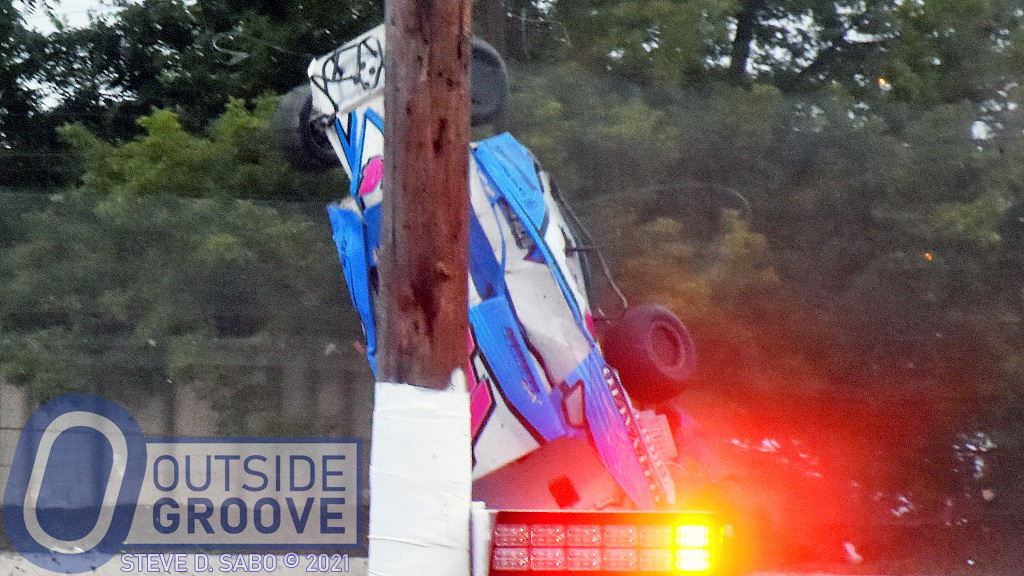 The modified driven by rookie Nathan Brinker somersaulted like an Olympic gymnast. The incident occurred last weekend after hitting the cushion at Grandview Speedway in Bechtelsville, Pennsylvania.

“The car hiked up, the nose went down, dug in, and launched my car,” Brinker, 20, of Macungie, Pennsylvania, said. “It was my worst crash ever. I had bad crashes racing 600 mods and micros, but never one in a full-size car.”

Fortunately, Brinker emerged from the wreck unscathed. He sat in a brand-new full-containment seat from Kirkey, with a five-point harness from Simpson. Brinker wore an Impact Carbon Fiber Air Draft helmet paired with a HANS device.

His car, a 2018 model from Bicknell Racing Products, needed a new front clip. Brinker brought the car to S&S Speed Center in Kingston, Pennsylvania, to repair it in time for his next race this weekend. While he waited for his chassis to return, Brinker worked on mending his body.

“Aluminum is scarce this season,” said Brinker. “The body panels will be crinkled a bit, but pretty well fixed. We will have to make due with what we have.”

Prior to racing modifieds, Brinker competed in the sportsman division for three years. He won a feature last season at Big Diamond Speedway in Pottsville, Pennsylvania. Brinker’s old sportsman, a 2014 Bicknell, now serves as his backup car. He has participated in racing since he was a young kid.

“My uncle raced at [now-defunct] Dorney Park [Speedway in Allentown, Pennsylvania] and he inspired me to be a racer,” Brinker, a prefab flooring shop manager, said. “When I was four, a couple of my neighbor’s kids got quarter midgets. I watched and thought it would be cool to drive one. That was the beginning of my path to modifieds.”

With Grandview Speedway only 20 minutes from home and work, Nathan Brinker plans to concentrate his efforts there. He maintains modest expectations for his rookie season.

“I’m not concerned about points,” said Brinker. “It is a learning year for me — and there is a lot to learn about modifieds.”