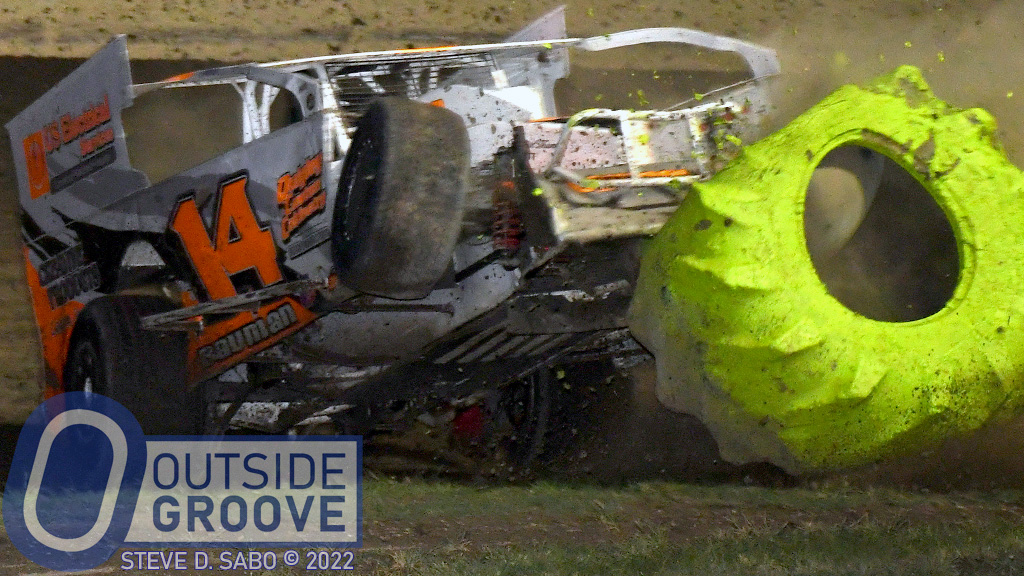 Sportsman driver Logan Bauman encountered the monster feared by many oval-track racers — the dreaded yuke tire — during his heat race at Grandview Speedway in Bechtelsville, Pennsylvania. He tried to avoid the brunt of the huge object that earned its name from the Euclid Company of Ohio that used those tires on its articulated dump trucks.

“I tried to square up the front bumper of my car to the tire,” Bauman, of Bechtelsville, Pennsylvania, said. “I was moving toward the tire at 65 mph, and I knew I had to hit as much of the tire that I could with my bumper to minimize front end damage.”

The impact from Bauman’s car into the tire bounced both of them into the air.

“The initial hit did not feel that bad,” said Bauman. “The car slamming back into the ground was a memorable jolt. I had a sore neck and back the next morning.”

Bauman sat in a Kirkey full-containment seat paired with a Crow Safety Gear five-point harness. He wore a Zamp helmet and a NecksGen head-and-neck restraint.

“My safety equipment absolutely stopped me from getting a worse injury,” Bauman said. “The NecksGen took the motion out of both hits. It didn’t let my head go forward on the initial impact or my face to go downward in the second impact. I would have been a lot more pain if I wasn’t wearing the NecksGen.”

“I thought the damage to my car was going to be bad,” said Bauman. “All that we needed was a new front bumper, a nose piece, and a right-front shock.”

Logan Bauman qualified for the feature through the consolation race. He finished 19th at the end of the night. Bauman said it epitomized his 2022 season, which he characterized as “up and down.” He has earned only one top-five finish. Last year, he had a win and two seconds.

“I didn’t have pass as many cars last year,” Bauman said. “Starting further back in the pack is not a bad thing. You may think there is less of a chance to win, but your ability to pass cars increases with each pass you make. When we get a better starting position, it will be easier to pass four cars instead of 10.”