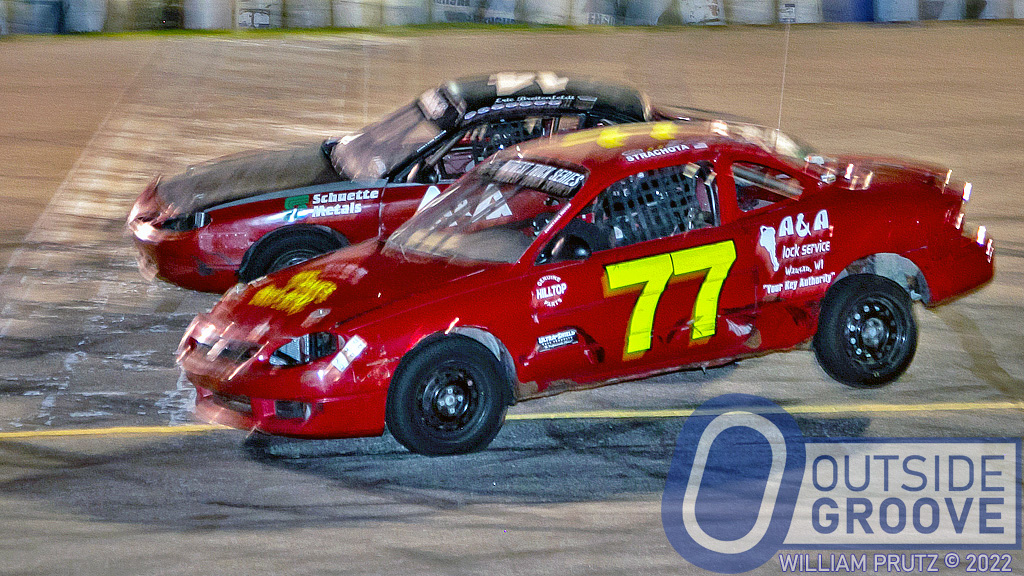 The race at Golden Sands Speedway came down to the line between Eric Breitenfeldt (background) and Garret Strachota (foreground). The nose of Breitenfeldt’s car may have crossed the finish line first, but its transponder did not. Instead, the scoring loop first picked up Garret Strachota’s ride. So, who won at the Wisconsin Rapids, Wisconsin, track?

The Battle to the Checkers

Both drivers hail from Wausau, Wisconsin, and are good friends. Strachota served as Breitenfeldt’s best man at his wedding. They even work on each other’s cars.

“We were coming down the backstretch, and Eric blocked me hard,” Strachota said. “I took it as the all clear to move him out of the way. I pushed him up the hill in three and four and he pinched me down coming to the finish line.”

Their cars then made contact. Strachota’s bounced off the track, but his transponder crossed the line before Breitenfeldt’s.

“We just touched, and I went for a ride at the finish line,” said Strachota. “My car hit the infield, the grass was wet, and I went sliding into the light pole.”

The transponders determine the finish, according to Golden Sands Speedway official, Cody Smiley.

The night before, at State Park Speedway in Wausau, Wisconsin, the championship battle between Eric Breitenfeldt and Garret Strachota came down to the wire.

They tied for points.

Officials then went to the number of features won by each driver to break the tie.

To break the tie, the officials went to wins.

The track then went to “natural” wins.

Breitenfeldt technically won one of those four features after the racer who crossed the line was disqualified.

So, the track awarded Strachota the 2022 mini stock championship.

Breitenfeldt initially felt that was unfair, but he then thought it through.

“If my technical win counted, the officials would have used fastest times,” Breitenfeldt said. “Garret has me beaten there.”

It’s Not Over with Yet