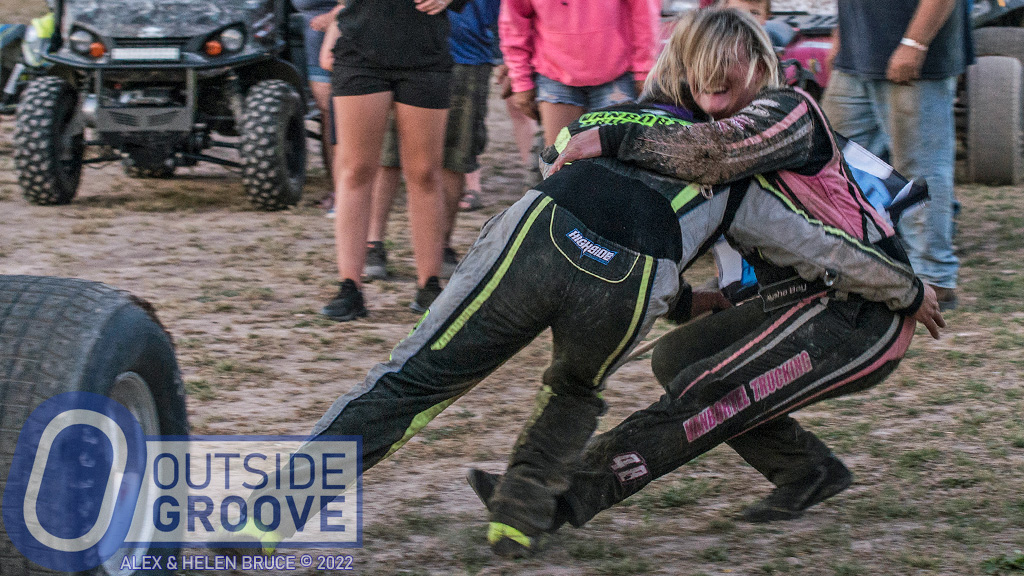 Don’t worry when Alysha Bay or Darryl Ruggles goes to tackle the other in victory lane. There isn’t a fight on the frontstretch. Instead, this is how the father and daughter celebrate the joy they feel when they see each other win. This example occurred after the 305 sprint car feature last Saturday at Land of Legends Raceway in Canandaigua, New York, where Ruggles won.

The tradition began in 2020, when Bay won the Land of Legends Raceway track championship.

“I said, ‘Guys, if I win the championship, you all are going to have to doggy pile, because it’s going to be cool. It’s going to be the first female to ever win a championship at the track,’” said Bay. “Then, at the beginning of the year, [my dad] goes, ‘If you win, I’m going to pile you up.’”

The two seem to love trash-talking each other, but don’t mistake that as an intense rivalry.

“We live together and work on the cars together,” Bay said. “I own a hair salon and he owns an auto body shop. We are in the same building. I have one of the bays at the far end of the shop.”

On the track, Bay and Ruggles remain quite close, too.

“If either one of us is out front, we tend to watch each other race and forget about what we’re doing,” said Bay. “We’re cheering each other on.”

Ultimately, the reason why they tackle each other comes down to the way they express emotion.

“When one of us wins, we’re happy for each other,” Bay said. “We have so much excitement.”

Darryl Ruggles currently sits first in the point standings, with three wins, and Alysha Bay is in third, with one win. After a rough start to the season, Bay said she looks forward to inching closer to her second championship and dethroning her father from the top spot. Nevertheless, if it’s Bay or Ruggles, you can guarantee they’ll celebrate in their special way. And, the spectators will enjoy it, too.

“The crowd was crazy last Saturday,” said Bay of the reaction the tackle from the grandstands. “It was loud. They were all cheering.”