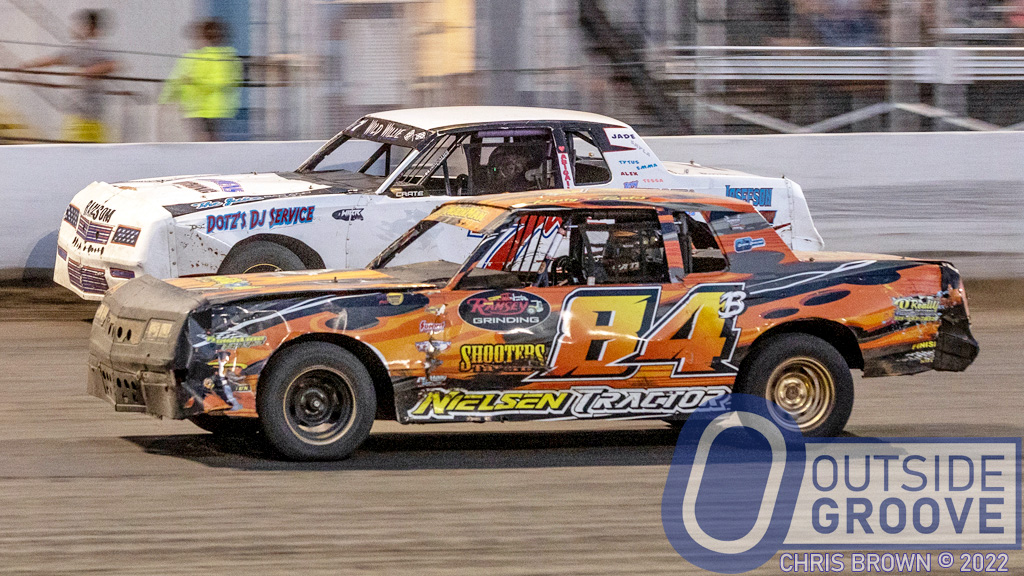 After 26 years since he first started racing, Rusty Bates finally made it to victory lane. The triumph occurred in dramatic fashion on Saturday at Shelby County Speedway in Harlan, Iowa.

Bates first hopped into a race car in 1996, and then hung up his helmet in 2006. The first five seasons he competed in hobby stocks. The last five in modifieds. Regardless of the division, he put all of his heart, soul, and paycheck into racing. His career in the sport came to an abrupt stop.

“I got skewered at Stuart [International Speedway in Stuart, Iowa],” Bates, 56, of Casey, Iowa, said. “I got taken out, driven into the wall, and my car got destroyed. All the money I had was in that car. I didn’t have the money to get it back together. I was frustrated and I quit.”

Bates left one final note after the wreck that still has people calling him “Moon Man” to this day.

“I got up on the roof of my car and dropped my drawers,” Bates said. “I mooned the guy who wrecked me.”

The Return of Rusty Bates

After his two brothers passed away — Lyle at 52 and Bill at 58 — Bates had an epiphany. He shared that with his wife, Julie.

“I told her I felt that life is too short, and I want to do something I really enjoy and miss so much — racing,” said Bates. “She understood. We bought a car from a friend and went racing again.”

Bates returned to hobby stocks in 2020, but his first season back didn’t go smoothly.

“I could barely afford that hobby stock, let alone a modified,” Bates, a USPS rural letter carrier, said. “I wound up blowing an engine in 2020, and had to buy another crate engine.”

A Change in Scenery

He competed regularly at Boone Speedway in Iowa. However, on June 4, Mother Nature sent Bates in a different direction.

“Boone Speedway was rained out,” said Bates. “One of the guys that I race with called Shelby County Speedway and found out the program there was still on.”

Bates finished 10th among a field of 17 cars.

“That night was the first time I drove at Shelby County Speedway,” Bates said. “I took to it and came back this past weekend. It was an easy decision — the people who run the track are nice, and the drivers are super great.”

Second Time Is the Charm

In his return to Shelby County Speedway, Rusty Bates started third. He raced to a photo finish with Jason Fusselman, who challenged Bates for most of the night.

“I had no idea who was behind me or how close they were to me,” said Bates. “I was running the tires [at the bottom of the track] and I later learned Jason was alongside my car, but up top. When we came down to the checkered flag, we were dead even.”

His performance earned an admirer in Fusselman.

“I didn’t know Jason, but now he knows me,” Bates said. “He came up to me after the race and told me I drove a good race. He said he hopes we can do it again — he wanted a rematch, I guess.”

Fusselman will get his wish.

“I’m going to be a regular at Shelby County Speedway now,” said Bates. “Their next race is the 29th. I’ll be there.”