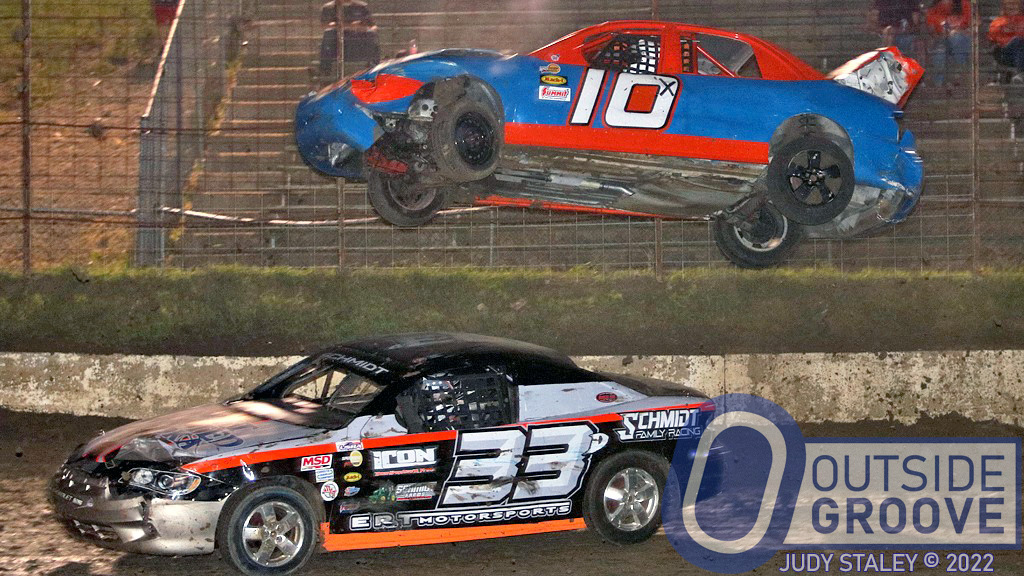 IMCA sport compact driver David Miller (10x) won the race, but lost the car as he took the checkers. The bizarre finish occurred at US 36 Raceway in Osborn, Missouri.

Devin Schmidt (33D), Miller, and Brad Mick went three-wide coming off turn four on the final lap. Miller then went airborne as he crossed the finish line. He doesn’t know how or why he took the trip to the skies.

“I won the race, but not the way I wanted to win it,” Miller, of St. Joseph, Missouri, said. “I remember getting a run down the straightaway and the checkered flag. Then, I saw the wall. In a split second my car was flying and twisting into the air, high above the speedway’s surface.”

Miller raced a car owned by friend and coworker Hunter Throckmorton, of St. Joseph, Missouri. He helped Throckmorton build the car based on a 2005 Chevrolet Cavalier. Miller said he was shaking it down at US 36 Raceway. Miller started in the third row before battling among the top three. After getting airborne, Miller landed on all fours, and the engine kept running until he shut it down.

The impact caved in the car’s right-rear quarter panel to the deck. It also bent the right-front frame up nearly 90 degrees.

“My goodness, it was totaled,” said Miller. “It looked like a hatchback. The nose-dive buckled the entire deck. I was looking forward to both of us racing together on Saturday night. Now all we have for Hunter is an engine and a cage. We’re shopping for a donor car.”

Fortunately, Miller walked out of the car and into victory lane without injury. He sat in a Kirkey seat, with a Speedway Motors five-point harness. He wore a Zamp helmet paired with a NecksGen head-and-neck restraint.

“Hunter said, ‘Don’t worry about the car — the most important thing is that you are okay,’” Miller said. “Even so, I couldn’t sleep that night. I was happy we won with the new car, but I was mad that I destroyed the car.”

While David Miller may have mixed feelings about what occurred, he recognizes that the fans enjoyed the show.

“The sport compact division has the best racing there is,” said Miller. “The fans saw a finish they will never forget.”