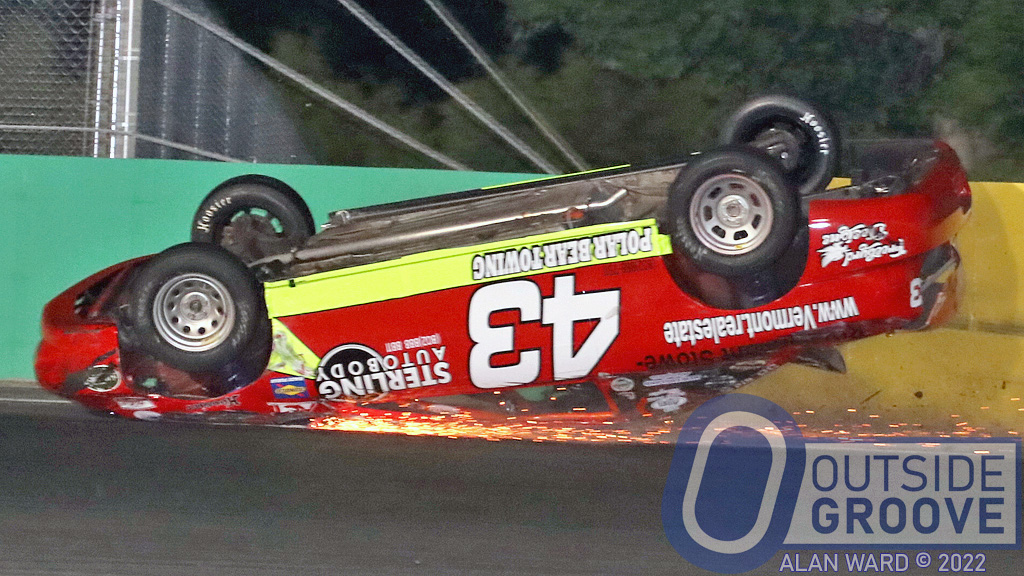 Despite slamming the wall hard with its roof and then sliding on its top to a rest, Jamie Davis looks to repair his prized car. After all, he won two street stock championships (2015 & 2017) with it at Thunder Road in Barre, Vermont. The incident occurred at the storied track last Friday. Davis said he went toward the wall after contact with the car driven by Curtis Franks, of Topsham, Vermont.

“I was in the outside groove,” Davis, of Wolcott, Vermont, said. “I climbed the right front of the other car in turn one and two, and hit the wall roof-first. My car bicycled, bounced, and rotated to finally skid on its lid halfway down the backstretch.”

On this night, Davis attended his daughter Alana’s sixth-grade graduation. A friend qualified the car for him in his absence. When Davis returned to the track, he had to start in the rear for the feature. Franks made contact with Davis to avoid a spinning car.

“We door slapped and banged into each other,” said Davis. “The next thing I knew I was upside-down. I had been upside-down before and knew to shut the master switch and put my hands against the roof to support myself so the safety crew could release my belts.”

Davis had little room to escape.

“I dropped out of the seat, rolled on the roof, and slid out the window,” Davis said. “I had some belt rash and my ribs and back were sore.”

Davis sat in a Kirkey seat, with an Impact Racing five-point harness. He wore a Bell helmet, but no head-and-neck restraint.

“The car’s center section was damaged from the impact with the wall,” said Davis. “The cage was pushed down eight inches. The bars connected to the halo were twisted and the eight-gallon fuel cell bowed from the impact. The body was destroyed — even the rivets holding the firewall popped out.”

On Tuesday, Davis had his car on the frame machine.

“We’ll cut the roof off, release the tension on the cage, and cut the top of it out,” Davis said. “We’ll build a new halo, re-sleeve the support bars.”

“We’ll add more support,” said Davis. “I’m glad I wasn’t harpooned by another car. We learned that there has to be more support for the cage.”

Jamie Davis plans to borrow a car to race on Thursday night at Thunder Road. However, he still hopes to bring his championship-winning 1996 Chevrolet Cavalier back to the track soon.

“It’s been a good car for us, so we want to save it,” Davis said. “We will make it better and faster.”