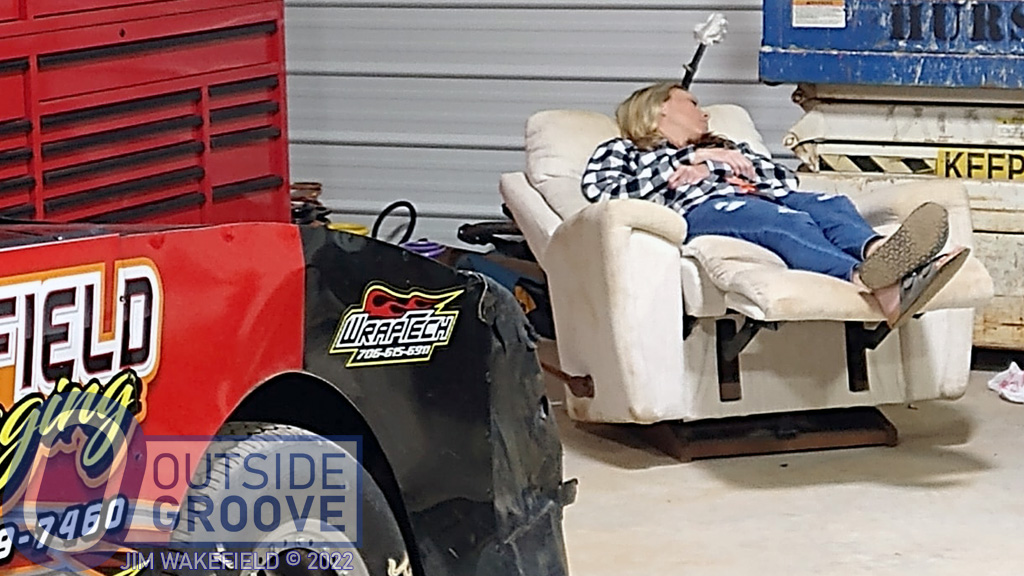 For Mother’s Day, Christy Wakefield was caught sleeping in the garage. Her racer husband, Jim Wakefield, took a photo of Christy in that moment and shared it on Facebook.

“He thought it was funny,” Christy, of Delta, Alabama, said. “He was the one who told me to take it easy because it was my holiday. Then, he caught me sleeping.”

Christy’s recliner is a fixture in the garage shared by Jim and their sons Jaxon and Lane.

“I run errands for the boys, but I am mostly there for supervision and moral support,” said Christy. “Yes, they do need supervision to get things done efficiently.”

“A mother worries about driving, but Jaxon hurt his arm playing baseball and had a delay in driving this year,” Christy said. “He just started doing well in the past couple of weeks.”

Christy and Jim didn’t grow up around racing.

“Some of Jim’s buddies convinced us to come see them race — that was all it took,” said Christy. “We had to get involved. I love racing. I never dreamed I would be at a dirt track every Saturday night.

“The kids I teach know about race cars,” Christy said. “Their mommas have showed them videos and pictures of us racing.”

“The boys took me out to eat — it was a wonderful day,” Christy said. “That reclining chair is always there for me. After dinner, they told me to just relax, and I did.”