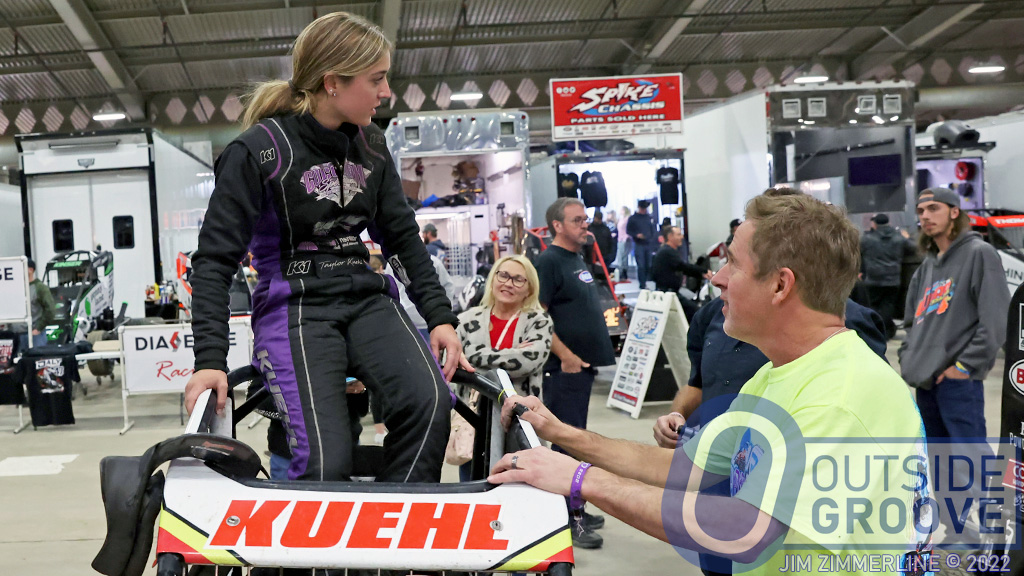 For the first time, sport mod racer Taylor Kuehl sat in a dirt midget, racing the Lucas Oil Chili Bowl Nationals in Tulsa, Oklahoma, last week. The opportunity to compete in the event and represent the Team Jack Foundation resulted from her thoughtful response to a car owner’s call for a driver.

Car owner Mark Burch, of Lincoln, Nebraksa, posted on Facebook that he sought another pilot to steer his second car at the Chili Bowl. Kuehl’s friend, Lori Cutter, tagged Kuehl on the post. The car featured the Team Jack Foundation, a non-profit organization dedicated to the research of pediatric brain cancer.

“I looked into [the Team Jack Foundation’s] goals and journey to create the foundation,” Kuehl, 21, of Cave Creek, Arizona, said. “What I read really hit me hard.”

“I thanked him for raising awareness of pediatric brain cancer,” said Kuehl. “I explained my racing background, told him how passionate I was about racing and that I was ready to learn a new skill — driving a midget. Also, I said I know what it takes to run a successful race team and how difficult it is. I said I would take care of his equipment, clean his car, and drive it like it was my own. He replied that I would be a good fit for his team.”

The Team Jack Foundation derives its name from Jack Hoffman. As a five-year-old, doctors found he had a brain tumor. Since then he has endured surgeries, treatments, and epilepsy, and currently participates in a clinical trial to treat his cancer. Despite that, he attempts to live a fairly regular life as a high school sophomore, and even plays on the high school football team.

Kuehl’s teammate Don Droud Jr., of Lincoln, Nebraska, and Burch helped her acclimate to the midget so she could race through the alphabet soup of mains and raise awareness for the Team Jack Foundation.

“Don and Mark got me comfortable in the car, and they were my coaches all week,” Kuehl said. “They made the experience a lot less stressful.”

Going from a sport mod to a midget proved to be quite the jump for Kuehl. She qualified for the O main on Saturday, but failed to finish the event, ending her day early.

“I hold myself to a much higher standard than most people realize,” said Kuehl. “I felt I could have done better. It was a learning experience and I learned a ton, so in that aspect it was a successful run.”

For more on Taylor Kuehl, read “Taylor Kuehl: Racing Solo, Away From Home.”