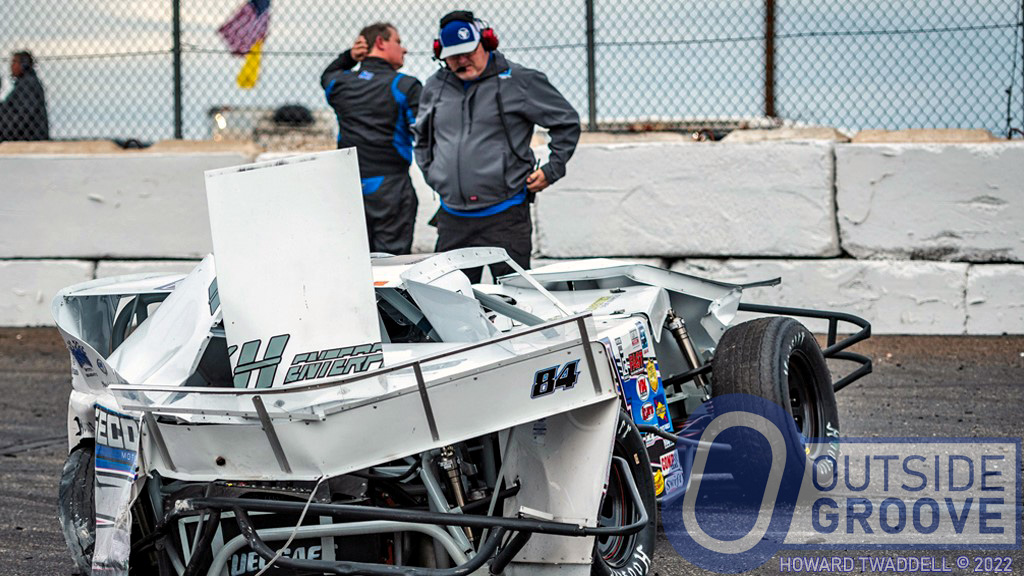 With four laps to go in the feature, Eddie Secord (background) exited his car after a promising run had come to crashing halt. The incident occurred during the Spears Modified Series’ event at Havasu 95 Speedway in Lake Havasu City, Arizona.

“It sucks when it’s the first race of the season, you’re running second with five laps to go, in your one and only car, and something happens so fast there’s no time to even think about it,” Secord, 50, of Oak Hills, California, said. “It was the second worst crash of my career.”

His worst crash occurred at The Bullring at Las Vegas Motor Speedway. A competitor’s late model landed on top of his, and an ensuing fire badly burned Secord. It took him six months to heal.

“In 2014, I decided to move to the modifieds after my third worst crash, in my late model at Kern County Raceway Park [in Bakersfield, California],” said Secord. “I figured a modified would be a little less expensive to race.”

Secord said Andrew Anderson challenged him for second by moving on his inside in turn two. As they battled, Kyle Jacks then went below them in turn three. That’s when Anderson and Secord collided, sending Secord’s car into the wall.

“It all happened so fast,” Secord said. “I never got to lift — I went into three full song. I wasn’t injured at all. The cage and cockpit held up perfectly.”

Eddie Secord wore a Pyrotect helmet paired with a HANS device. He sat in a Kirkey full-containment seat paired with a DJ Safety five-point harness. While Secord was not hurt, he has yet to determine the extent of the damage to his Race Car Factory chassis.

“We just started going through the car to see what is still usable or not usable,” said Secord. “Right now, our racing season is on hold until we figure this out.”