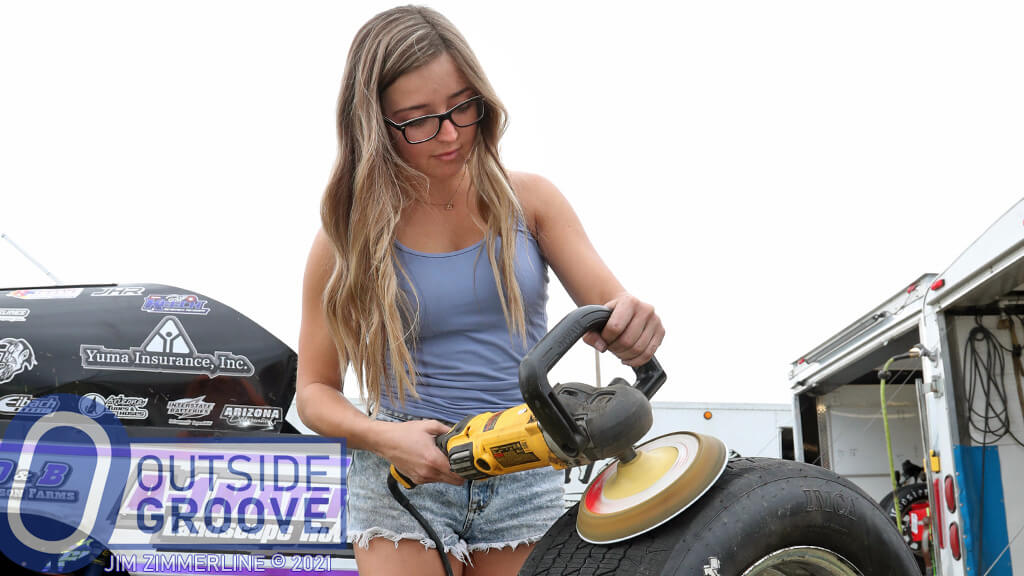 Taylor Kuehl learned early on that the racing world could be her oyster, if she worked for it. The 20-year-old from Cave Creek, Arizona, travels the country solo. She hauls her IMCA sport mod on an open trailer, with a 2017 Ford F-250 pickup.

“There is always someone in the racing family nearby,” Kuehl said from Boone, Iowa, where she works on her car at Boone Speedway. “I have no day job — racing is my full-time job.”

Kuehl worked two jobs over the off-season to race in Iowa this summer. She spent eight hours during the day as a front desk receptionist at a car dealership. At night, she served tables at a restaurant. In May, Kuehl and her father, Chuck, drove from Arizona to Iowa, with her father flying back. It was not the first time he left his daughter to herself in a state far from home.

Last year, farmer and racer Brad Johnson offered Kuehl to race his modified in Montana. (See “Brad Johnson: Team Donates Winnings at Las Vegas”.) He met her in Arizona during the winter racing season at Canyon Speedway Park in Peoria. While in Montana, Kuehl worked as a farmhand, driving a combine to harvest wheat and peas. She did so to raise funds to buy her current BMS Racecars sport mod. Kuehl then raced at several tracks in North Dakota and proceeded to compete in the IMCA Speedway Motors Super Nationals.

“It’s all about the connections made at the racetrack,” said Kuehl. “Opportunities have always been presented to me. I want to learn and people see how dedicated I am to being a racer.”

“Lawty saw me race and said he wanted to see me race in Iowa,” Kuehl said. “He offered me a place to wash and work on my car at the speedway.”

Kuehl’s learning while racing in the hotbed of IMCA racing in Iowa. Her best finish so far this year has been seventh.

“I do all the maintenance on my car by myself,” said Kuehl. “At the track, the drivers I race with and their crews are always offering help. Iowa is crazy different than anywhere I’ve raced. Anyone here will help you — they want you to be a competitive driver.”

Taylor Kuehl aspires to race at as many tracks in Central Iowa as possible.

“I came here to gain experience,” Kuehl said. “It’s a tough go when you are alone. I’ve been fortunate that simply parking next to other teams has them pitching in to help me.”