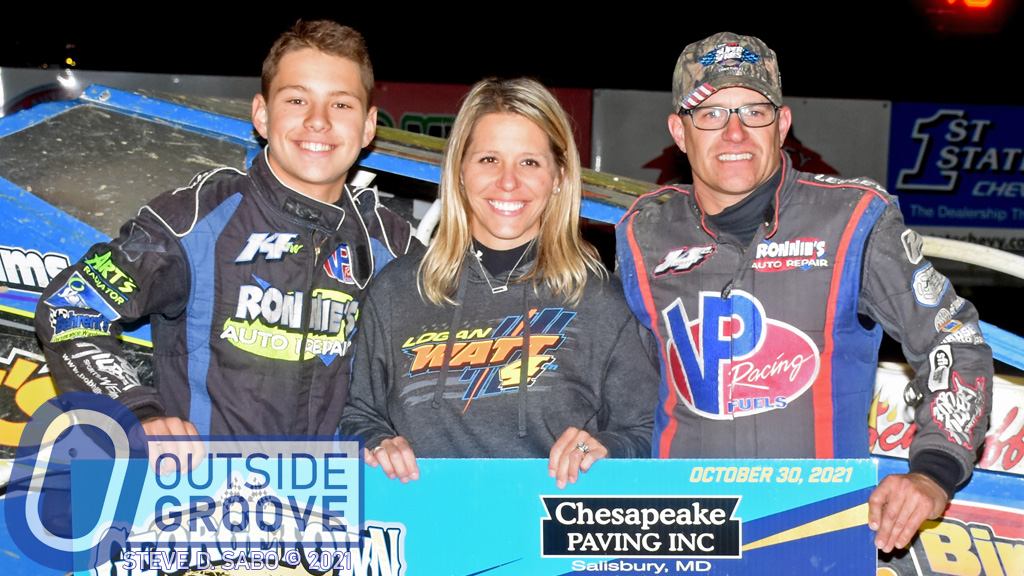 The apple doesn’t fall far from the tree for Logan Watt (left), pictured here with his mother, Lesley, and father, Ryan, after Ryan won the track championship at Georgetown Speedway in Delaware. Logan, 13, had a breakout season of his own as he jumped from USAC .25 midgets to crate 602 sportsman modifieds. He won his first crate 602 sportsman race and finished 10th in points at Big Diamond Speedway in Pottsville, Pennsylvania. Much of Logan’s quick acclimation to the class resulted from two things — USAC .25 midget experience and guidance from his father.

Logan’s grandfather, Bill Blatt, bought him a .25 midget for Christmas at age five. After his rookie season, Ryan encouraged his son to work on the ride.

When Logan was nine, he began to work on his father’s cars. He started by flattening body panels with a hammer. At age 10, he prepped tires. By age 11, he mastered much of what it takes to maintain a modified.

“Logan could disassemble a crate car,” said Ryan. “He disassembled his whole sportsman and reassembled it. He drilled the holes for the side rails, and rebuilt the body.”

Now, at age 13, Logan does much of the maintenance on his own car. Ryan said that Logan’s ability to quickly acclimate to the crate 602 sportsman class resulted from racing USAC .25 midgets.

“The USAC .25 midgets played a major role in his development,” Ryan said. “I couldn’t imagine him jumping into a modified at age 12 without the experience he got in the USAC program.”

The .25 midgets taught Logan things that a driver can only learn behind the wheel.

“The .25 midget program taught him patience,” said Ryan. “He learned things like setting up someone before passing them. He rolled that knowledge right into modifieds.”

And, the class instilled some lessons that go beyond the class.

“The program taught him that a lot of nights could be frustrating,” Ryan said. “I taught him to do the best you can. If you don’t win, don’t throw a fit. Move on to the next race and try your hardest. Racing is supposed to be fun.”

Ryan tries to make sure that his son doesn’t get enveloped by the sport at a young age.

“He’s still a kid,” said Ryan. “Racing is not a job. He still has to have time for school activities and have a social life with friends. We don’t want him to burn out on racing.”

However, he’s already gotten a taste of racing a big-block modified this past year.

“He said he was surprised that my big block wasn’t faster,” Ryan said.

Ryan’s stiffest competition may be on the horizon, but he couldn’t be prouder of his son, Logan.