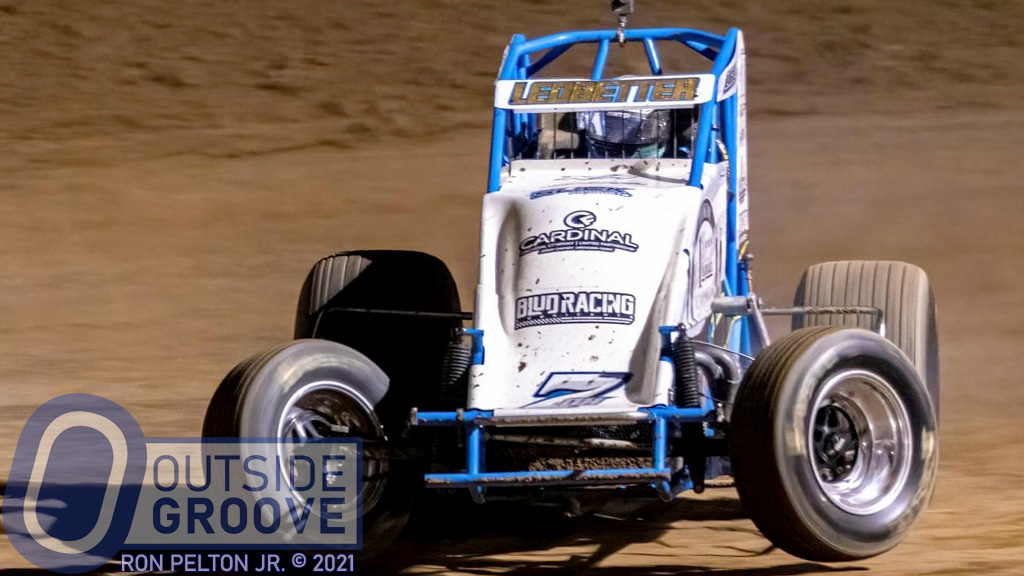 Thirty years ago, Bryan Ledbetter Jr. was born legally blind. This season he won the rookie of the year award for the wingless 360 sprint car division at Arizona Speedway in Queen Creek and finished second overall in points. Ledbetter’s eyesight improved over the years and he attributes that to racing.

“My wife and I waved our hands in front of our baby’s face and we were alarmed that he could not see,” said the elder Ledbetter. “We took him to a specialist, and it was determined he was blind.”

They fitted him with glasses and he performed exercises to strengthen the muscles in his eyes.

Ledbetter attended classes at The Foundation for Blind Children in Phoenix. When he entered first grade, his right eye had 20/80 vision and left had 20/70 while corrected with glasses. At 13 years old, the vision improved to 20/60 and 20/50, respectively, still while corrected.

“He was a freshman in high school and he told me he wanted to race,” said the elder Ledbetter, who raced street stocks at the time. “He got the bug from me and his grandfather. But, he was told he would never be able to race.”

Determined, Ledbetter made a plan to achieve his goals. A member of 4-H, he raised a steer, sold it, and bought himself a dirt modified at age 14.

“I wanted to be a driver — I wasn’t going to let anything stop me, not even being told I was legally blind,” Ledbetter, of Safford, Arizona, said. “I had to achieve my goal, which was make things that were supposed to hold me back not hold me back.”

That even applied for when he sought to drive a passenger car on the street.

“I failed my first attempt to get a learner’s permit to drive a car at 15 years old,” said Ledbetter. “I could not read all the letters on the eye test. My doctor said, ‘Try tilting your head a bit.’ I did that and I passed on the second try.”

As Ledbetter raced, he started noticing a change in his eyesight.

“I kept getting retested and my vision improved to 20/40, corrected, for my right eye after I started racing,” Ledbetter said. “It was the craziest thing. Every year I raced, my vision got better.”

Doctors attributed his improvement to his new hobby of motorsports.

“At high speeds, my brain was constantly working,” said Ledbetter. “My eyes developed and began to focus better and better.”

Not everyone was thrilled with a driver born legally blind competing against them. Some said Ledbetter was a danger on the track due to his eyesight.

“I had to prove to them that they are wrong,” Ledbetter said. “Today, with correction, I can see as well as anyone else on the racetrack.”

Bryan Ledbetter Jr. plans to run wingless 360 sprint cars again next year, traveling to New Mexico and California. He aspires to move up to the 410 sprints.

“If I could inspire other kids who are challenged, the first thing I would tell them is, ‘Don’t believe you never can do something, especially when someone tells you that you can’t,’ said Ledbetter. “You can do anything anyone else can do. It just takes determination.

“I wanted something bad enough and I kept on pushing. I took baby steps to my dream and, eventually, I crossed the finish line.”