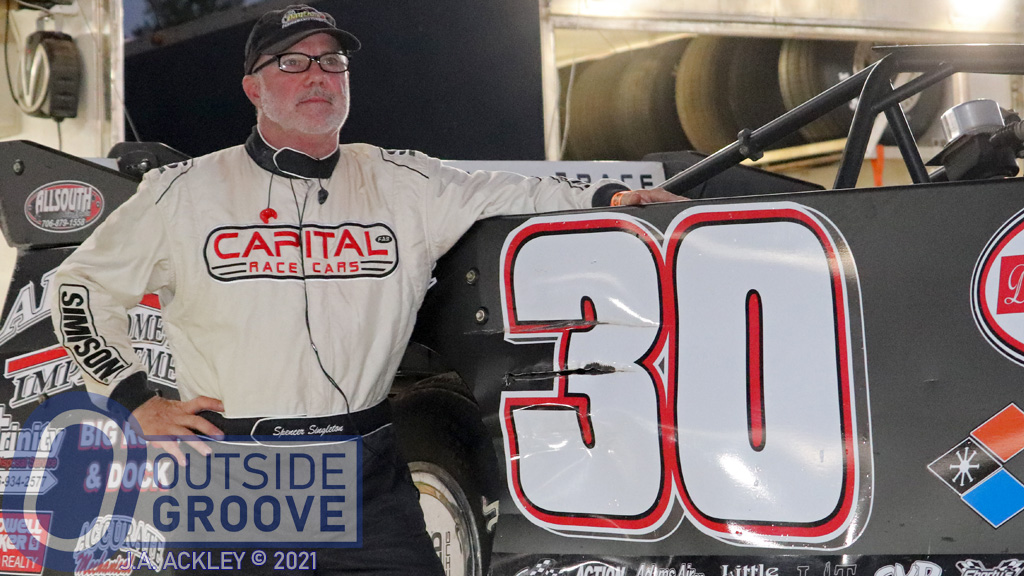 Spencer Singleton carries the No. 30 on his 602 sportsman late model in honor of his older brother, Dale Singleton. Dale made his mark in the record books by racing motorcycles. On two wheels, the man known as “The Flying Pig Farmer” won the Daytona 200 — twice, in 1979 and 1981 — while racing for privateer teams. During this time one of Dale’s trusted crew members was his younger brother Spencer.

“He always included me in everything,” said Spencer, 60, of Dalton, Georgia. “I went to Europe and traveled all across the United States with him. I was his little brother and I was his helper. My brother, he was a rock star back then.”

As a kid, Dale aspired to win one of motorcycle racing’s greatest events, and he shared that dream with Spencer.

“[I remember] him reading stories to me under the [bed’s] covers with a flashlight about his motorcycle heroes, wanting to win Daytona, when he was probably 10 years old and I was four,” Spencer said. “By him winning the 1979 Daytona 200 and reaching that dream that he had when he was 10 years old, that’s pretty spectacular. There’s not a word [to describe] the feeling that he’s brought to the family by doing that. He never ever let anything stand in his way ever — and, he always done it his way.”

After success on two wheels, Dale started exploring four wheels, with NASCAR as his target. He made one NASCAR Xfinity Series start in 1982 and two ARCA Menards Series starts in 1985. Dale even made his own promotional video, which featured legendary motorsports journalist Dave Despain, to attract sponsorship.

“He directed all that,” said Spencer of the video. “He wrote [what] Dave Despain would speak about. Dale was so deep in talent.”

With a promising career ahead of him, Dale went to Darlington Raceway to chase sponsorship. He piloted his plane from Darlington back home to Georgia in September 1985. Unfortunately, he never made it. He, along with three others, including Richie Panch, another stock car driver and son of 1961 Daytona 500 winner Marvin Panch, perished in a plane crash. The plane had flew into a squall line and heavy rain. The plane came apart in mid-air.

“It took a long time to get over that,” Spencer said. “By the grace of God and faith … life has a way of working things out. I’ll just say that.”

Wherever Spencer Singleton races, he still carries Dale’s No. 30, despite nearly 36 years having passed since his untimely death.

“It’s the only number I’ve ever known,” said Spencer. “Memories never die — that’s what you hold onto.”

Outside Groove Note of Transparency: The pilot of the plane in the crash was corrected, as was the origin and destination of the flight (2021-10-25).