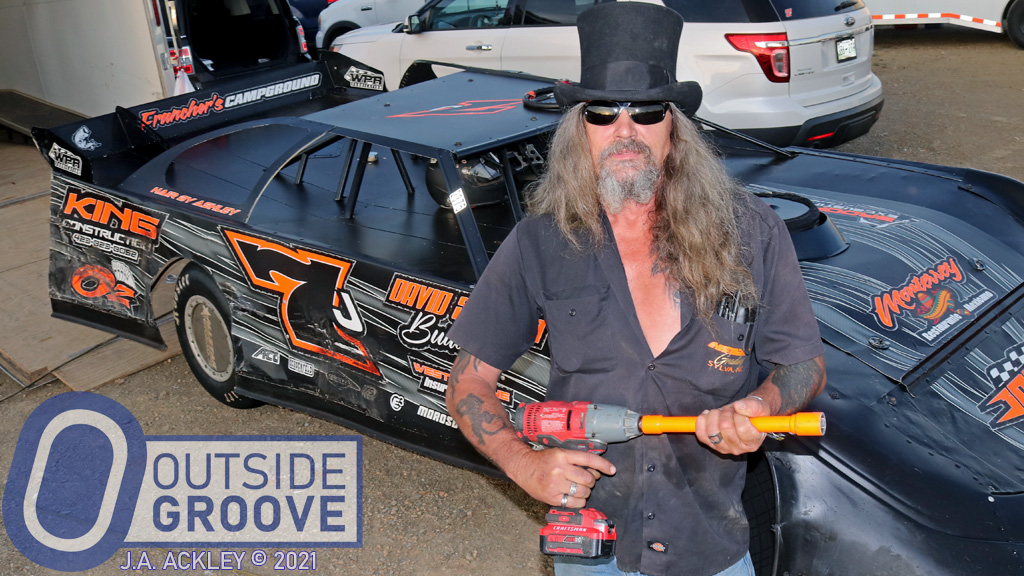 Some mistake Ronnie Hedden for Slash, the lead guitarist for hard rock band Guns N’ Roses, or for heavy metal singer Rob Zombie. However, instead of using a guitar or a microphone, you are far more likely to find him with an impact wrench at the races. That can be either as a crew member for a friend, such as sportsman late model driver Aaron Jones at Volunteer Speedway in Bulls Gap, Tennessee, on this day, or on his own late model he races at tracks such as Tri-County Race Track in Brasstown, North Carolina.

“I can’t carry note in a bucket,” said Hedden, 52, an excavation and grading company owner from Sylva, North Carolina. “I couldn’t tell you if a guitar had an up or a down.”

“A friend of ours got tickets to a Nickelback concert,” Hedden said. “We went VIP. The audience was trying to get through the gate, into our VIP [section], to get an autograph from Slash.”

The Downside of the Rock Star Appearance

Unfortunately, not everyone’s a fan of the way Hedden presents himself.

“My long hair and tattoos, that’s actually got me into handcuffs,” said Hedden. “I had done nothing wrong. It was a case of mistaken identity.”

Others make assumptions about Hedden based on his looks.

“I’ve got long hair, a goatee, a lot of tattoos, and a top hat — that’s kind of the rock star type of look,” Hedden said. “Some people think if you’re a rock star, you’re a dope head. Strangers come up to me and ask, ‘Do you got any?’ I said, ‘Got any what?’ [They then ask,] ‘Do you got any weed? Got any powder?’ That’s one thing I’ve never done in my life. I couldn’t tell you anything about it, but I get asked about it all the time.”

Don’t Judge a Book by its Cover

Wherever Hedden goes, whether it’s the racetrack or his second favorite pastime, a bike rally, he makes friends.

It was at a bike rally where he befriended a man named Dave who made Hedden his iconic top hat. He also helped create a motorcycle helmet in the form of a top hat for Hedden.

“[Dave] stands at 5’2″, weighs 95 lb. soaking wet, and is about 67 years old,” Hedden said. “Here’s a little bitty guy [at the bike rally], trying to get up his tent, and get his site and everything set up. I couldn’t stand to watch it any longer. I lent a helping hand … and, I found an awesome friend.”

Dave unfortunately suffered a stroke a couple of years ago, making Hedden’s top hat possibly one of the last Dave made. Hedden loves wearing it. He said while the hat is semi-water-resistant, he takes care to not put it in situations that could damage it. For example, you might see Hedden wear it at the dirt track, but he will put it away while working on a car.

Hedden said he doesn’t wear a top hat for attention. He wears it for the same reason businessmen may wear a particular suit.

“[The top hat] just feels good on my head,” said Hedden. “It does something to the way I feel about myself. It puts me in a groove.”

Likewise, he doesn’t maintain his look to mimic anyone.

“I’ve always loved long hair,” Hedden said. “I wore my my outfit for years [before] people came up to me [asking,] ‘Are you Rob Zombie?’”

Ultimately, Ronnie Hedden considers himself a free spirit. He feels that racing and motorcycles provide him with an outlet to fully be himself.

“Both [race cars and motorcycles] give me an adrenaline rush, but it’s not as much as the adrenaline rush, but a sense of freedom,” said Hedden of why he enjoys his favorite hobbies. “I’m able to express myself externally through riding my bike or slinging my racetrack around the track.”