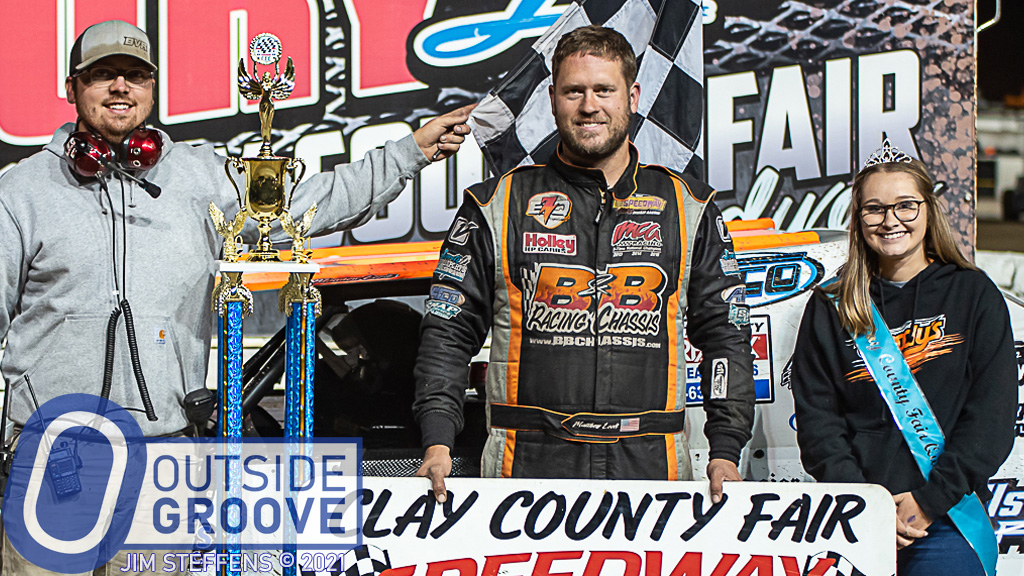 “Winning the 2021 national championship didn’t become a goal until the second half of the season,” Looft, of Swea City, Iowa, said.

The Looft family has a lot to juggle, now with three kids — two sons, Brayden, 7; and Brysen, 3, and a baby daughter, Brynlee.

“For most of my career in racing, it has been me and my wife working on the car at the track,” said Looft. “Brittney enjoys racing as much as I. The kids keeps track of scheduling, lineups, and points, as well as changing a tire here and there.

“Friend Greg Sidles and Brittney’s dad, Roger Schroeder, helped us as needed. My mom, Aleta, took care of the boys in the grandstands, where they became friends with other racing kids.”

“Winning the national title is an amazing feat, which takes hard work and dedication, along with lots of miles on the road,” Looft said. “You can’t afford a single DNF, and you have to win a lot of races. You have to choose the tracks you want to be at to make it all happen.”

“We stuck to our four tracks, and won the points championship at all of them,” said Looft. “When we won 17 [features in a 22-race stretch by] the end of July, we decided to go for [the national IMCA championship].”

Matthew Looft won the IMCA sport mod national championship by two points over Bo Partain, of Casa Grande, Arizona. (For more on Partain, see “Bo Partain: The Local Who Made a Name for Himself”.)

As far as making a run for a fifth national title in 2022, Looft is noncommittal.

“We’ll start out racing at our local tracks,” Looft said. “We’ll have to see if we want to travel and take in the money shows or stay local. With three kids it is going to be harder to race four nights a week.”