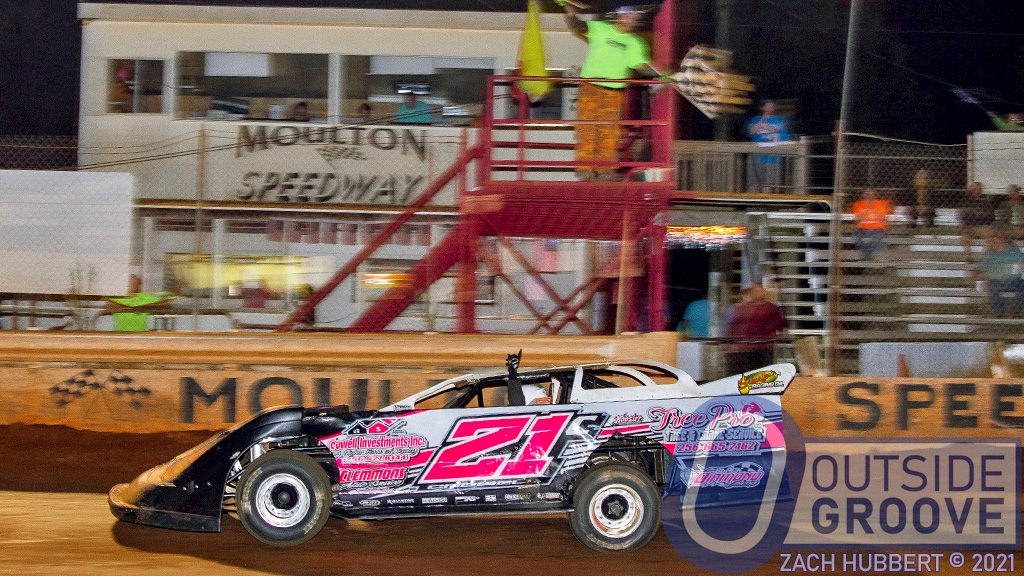 Morgen Lambert used a borrowed car to secure the Crate Racin’ USA (CRUSA) late model sportsman national championship last Friday with a feature win. The triumph occurred at Moulton Speedway in Danville, Alabama. The title didn’t come easy. He endured an engine protest and flipping his only car. However, in the end, Lambert prevailed.

“We had some pretty bad wrecks and some pretty big feuds this season,” said Lambert, 24, a body shop owner from Booneville, Mississippi. “There was a lot of drama. Drama takes the fun out of racing. I considered giving up, but my brother [Justin], my father [Mark], and my friends kept me going. I’m glad we didn’t give up.”

Lambert started racing only three years ago, in 2018. He bought a 2011 Barry Wright chassis and dove right in. This year, Lambert teamed up with Cale Finley Racing, of Athens, Alabama to update the chassis.

“Our success was from hard work,” Lambert said. “We have no big money behind us — we don’t have enough money to buy four brand-new tires every race. We make the best with what we have.”

His performance this season, which included 21 feature victories, caught the eye of his competitors.

“We had a hot streak going mid-season,” said Lambert. “Other racers couldn’t figure out how. They thought that because I ain’t been driving for 10 to 15 years I couldn’t beat them.”

“We ran [the new engine for] the rest of the season, and it ran just as good,” said Lambert. “We won about the same amount of races with it as we did with the original engine. They were more worried about us than what they had going on. You can run second or third and everyone is your friend. Every time you win, you gain enemies.”

At Thunderhill Raceway in Summertown, Tennessee, Lambert flipped his car after contact with the second-place car. The wreck severely damaged the ride. It could have cost him the championship, but it did not, thanks to a friend.

“Cacey Crowell offered me his 2016 Black Diamond late model chassis to drive at Moulton Speedway,” Lambert said. “He was real generous to do that for me.”