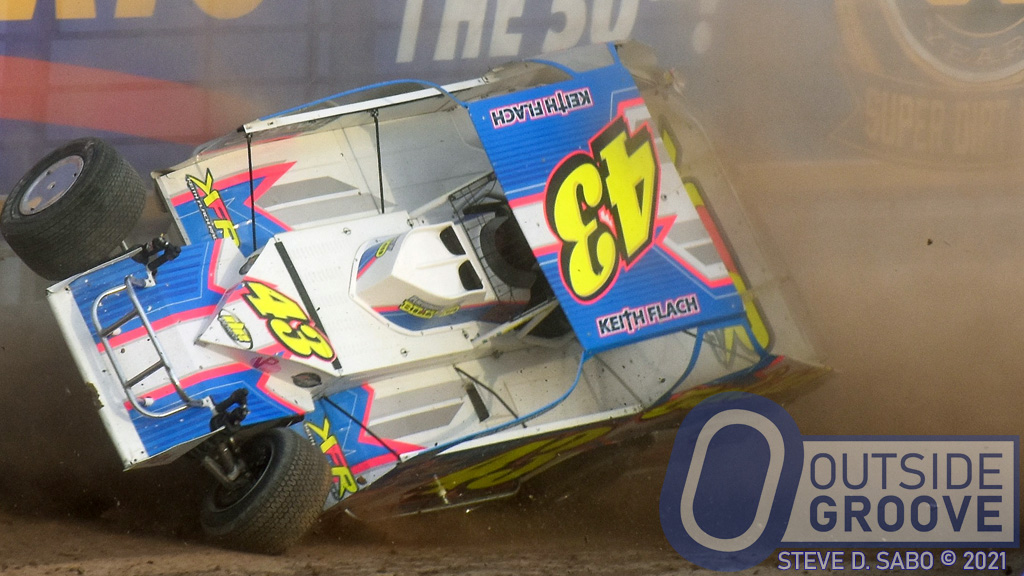 Believe it or not, Keith Flach saved it after this wild ride. It took place in the Super DIRTcar Series feature during Super DIRT Week at Oswego Speedway in New York. However, his car didn’t make it out unscathed. Nor, did his camper on the way back home.

First, the on-track incident. It occurred past the halfway point of the 200-lapper.

“I was surprised my car didn’t go over,” Flach, of Ravena, New York, said. “It got bounced into the air from holes in the track and came down on its two wheels against the wall, where there was a rolled-up berm.

“I cut the wheel to the left as hard as I could and the car came back around. I know the track crew did the best it could to prepare the track under weather conditions they couldn’t control. All week it looked like they were pushing Play-Doh. I could see the surface crumbling apart.”

Flach drove around the track and to pit road to have his crew check the car. They found a pinhole leak in the oil pan and “tweaked” front end on the 2021 chassis from Bicknell Racing Products.

“At that point, the fun meter pegged at about a one out of 10,” said Flach. “It wasn’t until after the race that we found some of the welds by the 2 x 4 on the chassis had cracked. It could have happened from hitting the holes or riding the wall.”

Keith Flach parked the car and finished 26th. Then, the day got even wilder. Approximately 10 miles away from his home, Flach couldn’t save his camper from the road’s soft shoulder sucking it in. That caused the camper to hit a low-hanging tree branch, ripping its top open.

“It was a pretty bad weekend overall,” Flach said. “We are assessing damages to the new [2021] car this week. It looks like our original racing plans are going to be shelved for a bit. Our best chance to race again will be at the [World of Outlaws] World Finals [at The Dirt Track at Charlotte Motor Speedway] in Charlotte next month.”