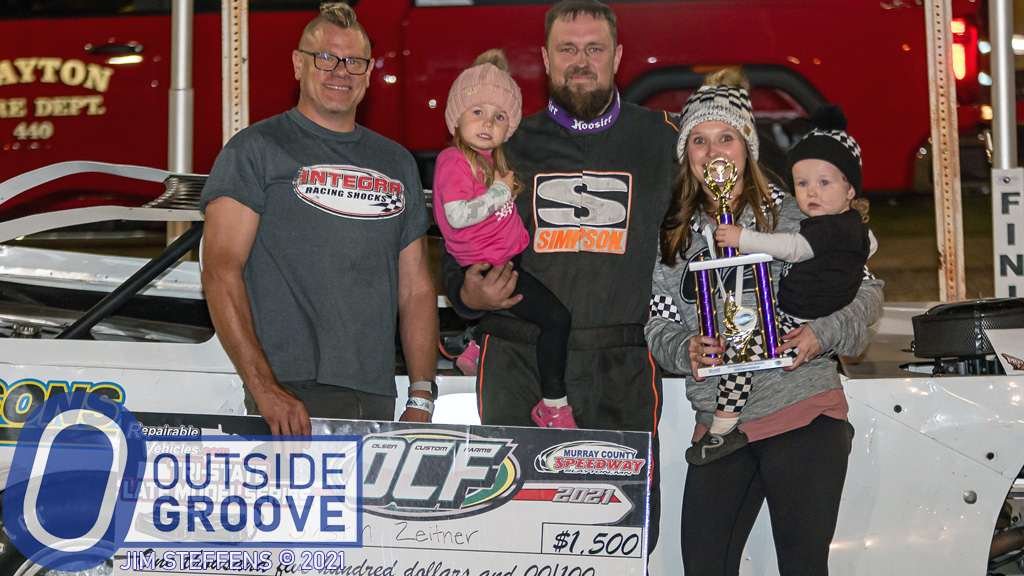 Like many late model racers, Justin Zeitner prefers to wander to various events rather than stick to one series. However, this year he committed to the Tri-State Late Model Series — and it resulted in eight feature wins and his first points championship. That series tally included this feature victory last Saturday at Murray County Speedway in Slayton, Minnesota. He celebrated the win and series title with crew chief Mitch Swartzendruber; three-year-old daughter, Zalee; wife, Jasmine; and two-year-old son, Rowdy.

“At the start of this season, I went to a few Tri-State Late Model Series races and wound up leading in points,” Zeitner, of Malvern, Iowa, said. “My dad, Leon, told me he would like to see me commit to one series for one time in my career. I told him the only thing I ever committed to was being married to my wife.”

Prior to making a name for himself in late models, Zeitner raced modifieds. In 2017, he won 29 of the 47 features he entered before the late model world beckoned.

“My dad had a late model and when he had a health issue, I stepped in to drive,” Zeitner said. “After driving a late model a couple of times, I got the itch and went for that division.”

Running the Tri-State Late Model Series required Zeitner to adhere to their schedule of 28 races, although seven events rained out. The final points tally resulted from a driver’s best 16 finishes. By following the circuit, he joined his father and grandfather, Rallen, as late model champions.

For 2022, Justin Zeitner plans to return to his nomadic lifestyle as a late model racer.

“I really like to race at different tracks, have new challenges, and meet new people,” Zeitner said. “The World 100 and The Dream [both at Eldora Speedway in New Weston, Ohio,] are on my list. I plan to race 65% to 70% of the [Super Late Model Racing Series (SLMR) events, as well as a few Lucas Oil [Late Model Dirt Series] events.  I raced 25 times this season and I am shooting for 35 to 40 late model events next season.

“And, I will never forget where I came from. I will run with the Tri-State [Late Model] Series every chance I get.”