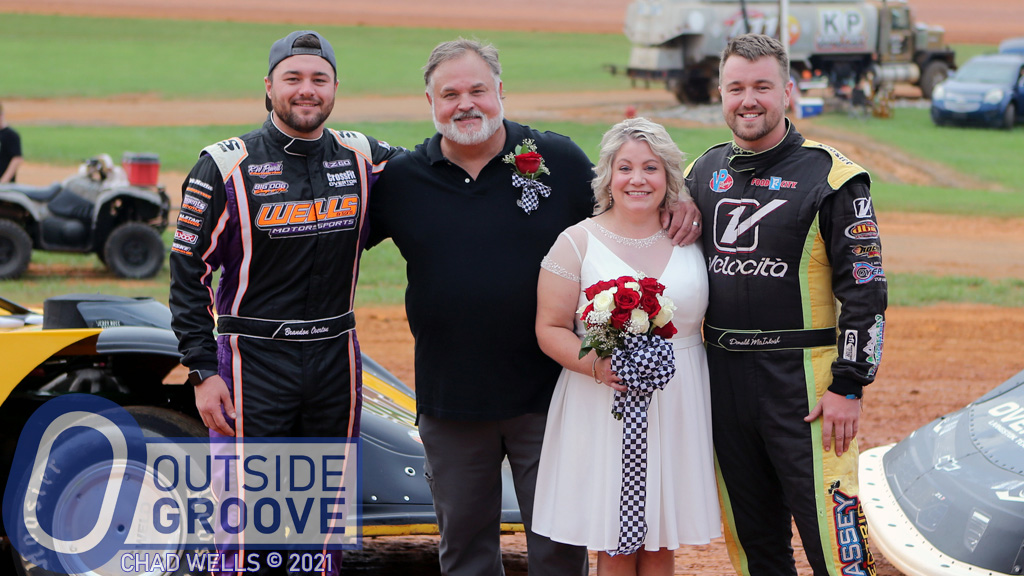 Jennifer Sherrill and Wesley Chester tied the knot last Saturday at 411 Motor Speedway in Seymour, Tennessee. The bride rode to the start-finish line sitting on the door of the late model driven by Donald McIntosh. The groom arrived in a similar fashion, but on the late model steered by Brandon Overton.

“It was a dream come true scenario,” Jennifer said. “We met on dirt, we got married on dirt.”

The two first met at the 2019 North/South 100 at Florence Speedway in Union, Kentucky.

David Bryant, crew chief for McIntosh, told his friend Jennifer to meet Wesley. Back then Wesley worked as the hauler driver for Rum Runner Racing, which Overton raced for at the time. Overton encouraged Jennifer, too, saying Wesley is “such a good dude, you should go out with him.”

Bryan and McIntosh gave the bride away. Overton served as Wesley’s best man.

“As I rode on the car in my bridal gown, I was terrified — especially when the fans started cheering,” said Jennifer. “Then, I kept telling myself my forever was about to happen.”

Jennifer endured tough times previously. She fought the battle of her life against breast cancer — and won. Jennifer’s support system included Bryant, McIntosh, and the rest of the Blount Motorsports team.

“They got me through what seemed to be impossible,” Jennifer said. “I didn’t know if I would find happiness again, and they helped that happen, too.”

The couple planned for the wedding to occur when the World of Outlaws Late Models were scheduled to appear at 411. When the series’ stop was cancelled, Jennifer panicked.

“I was worried that Brandon would go to Senoia [Raceway in Georgia] to race in the World of Outlaws,” said Jennifer. “Brandon is so precious. He told me, ‘I don’t care if the race pays $5 to win, I will be there for you.”

“I looked for someone like her my whole life,” Wesley said. “I found a woman with a common interest — she loves racing as much as I do. We’re both football fans too — cheering for the Carolina Panthers and the Tennessee Volunteers.”

After the races, the newly wedded couple took a brief honeymoon at Pigeon Forge in Tennessee. They said they plan to return to their favorite hot spot, the races, this weekend.