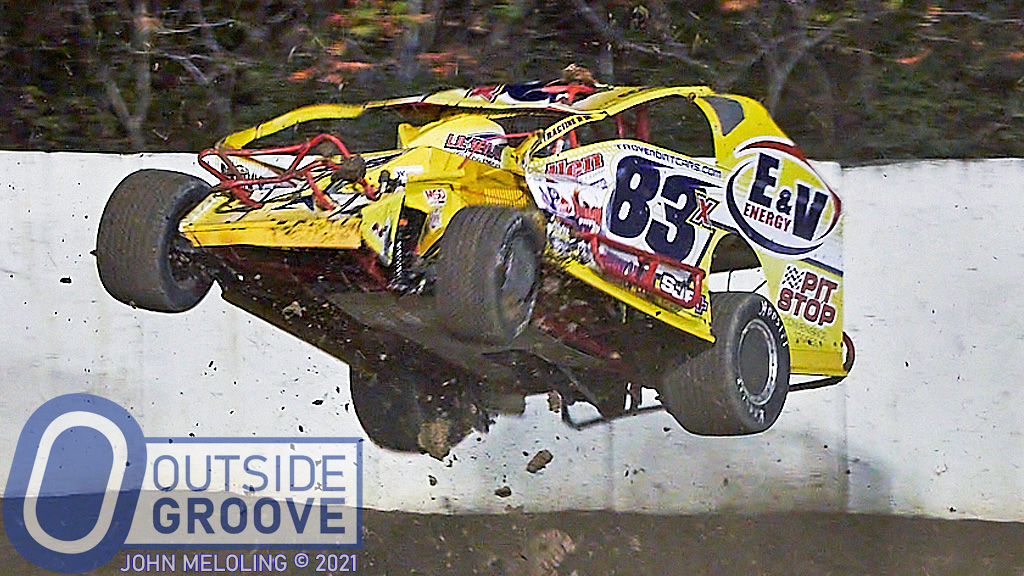 As he sat in the tech line for Super DIRT Week at New York’s Oswego Speedway, Tim Sears reflected on his 2021 season. While it started off well, he has lost two cars to wrecks within the last two months. That included this wild ride yesterday during the Super DIRTcar Series’ Demon 100 at Brewerton Speedway in New York. Twenty-five laps into the feature, Sears flipped his car going into turn one.

“The track was good and fast last night,” Sears, of Hastings, New York said. “I traction-rolled in the turn. The left side of the car picked up. I tried to save the car by steering out of it, but it happened so fast that it was hard to react. Once a car goes so far, there is nothing you can do but hang on for the ride.”

Sears emerged from the wreck not injured. He sat in a full-containment seat from The Joie of Seating, with a Simpson five-point harness. He paired his Bell helmet with a HANS device. His 2021 chassis from Troyer Dirt Cars did not survive.

“The car was toast — a total write-off,” said Sears. “The only thing we saved was our LJL/Kevlar [Racing Engines] big-block [engine].”

Sears competes in both big- and small-block races. He’s visited victory lane at a trio of New York dirt ovals, including two times at Brewerton Speedway, five times at Fulton Speedway, and two times at Weedsport Speedway. Six weeks ago, at Fulton, he flipped another car.

“That wreck wasn’t as bad,” Sears said. “We were able to bolt on all the suspension parts to the new chassis that we destroyed last night.”

Fortunately, Tim Sears had just completed another big-block modified for Super Dirt Week. He plans to compete in both big- and small-block events.

“Destroying a car is not a good way to start out a week as big as this one,” said Sears. “We finished second in the Outlaw 200 at Fulton Speedway Saturday night and lost the money we won in Tuesday night’s wreck. I’m just hoping all of the bad luck is out of the way.”