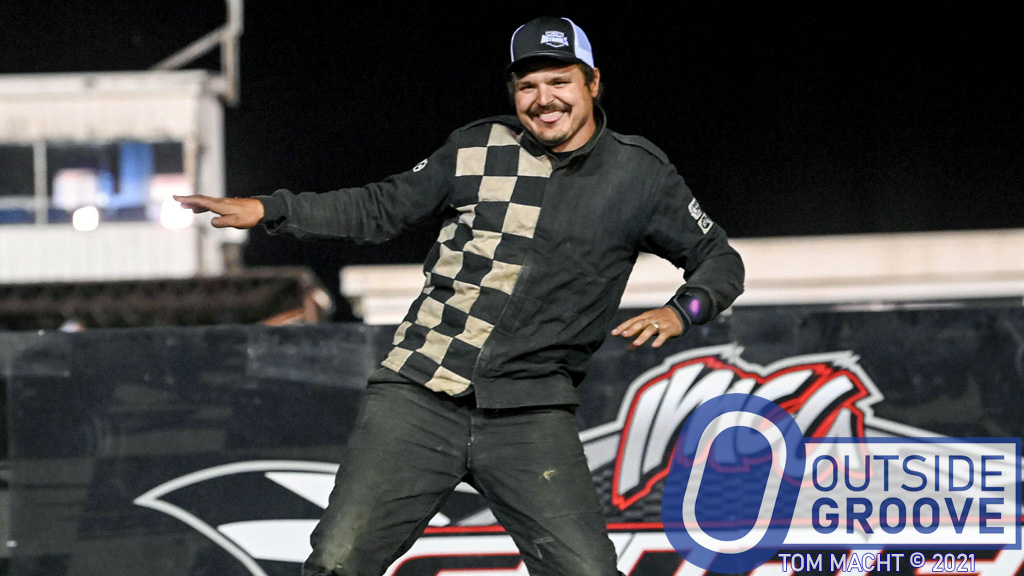 Many saw the joy in the dance Mitch Bielenberg performed in victory lane. After all, he won one of short-track racing’s most-prized events, the IMCA Speedway Motors Super Nationals at Boone Speedway in Iowa, with his sport compact. However, this win had deeper meaning.

“This Super Nationals win was for my brother and my father,” said Bielenberg, of Charlotte, Iowa. “They were all I was thinking about as I raced.”

The 1999 Dodge Neon Bielenberg drove to the victory was intended for his brother Michael. Michael, a U.S. Marine Corps veteran, passed away from brain cancer at age 32 in 2015.

“We were working to put the car together for him to drive, but cancer got the best of him before we could finish the project,” Bielenberg said. “I raced in the sport compact division since 2008. In 2013, I bought a sport mod. Michael wanted us to share the driving of the Neon so he could learn from me.”

Prior to Michael’s death, their father, Byrne, passed away in 2012. One fateful night at Benton County Speedway in Vinton, Iowa, Mitch and Byrne raced in the sport compacts. Byrne had won his heat race. As Byrne walked through the pits to get to his car, he suffered a massive heart attack.

After Michael’s passing, Mitch continued to work on his brother’s car. Mitch started to drive it in 2016.

“Yes, the car is old and worn out, but that is for good reason,” said Bielenberg. “It is a sentimental race car. Looks are deceiving. There is nothing new on the car since it was finished in 2016. There is more to what makes the car fast — it’s the spirit and memories that drive it.”

Despite the sad memories associated with the car’s past, Mitch Bielenberg found much to dance about.

“It was a celebration after winning the most prestigious race of the year,” Bielenberg said. “I was celebrating my dad, my brother, my family, and this Dodge Neon. I’m a fun person. I find happiness and love to express it. I don’t care what other people think.”