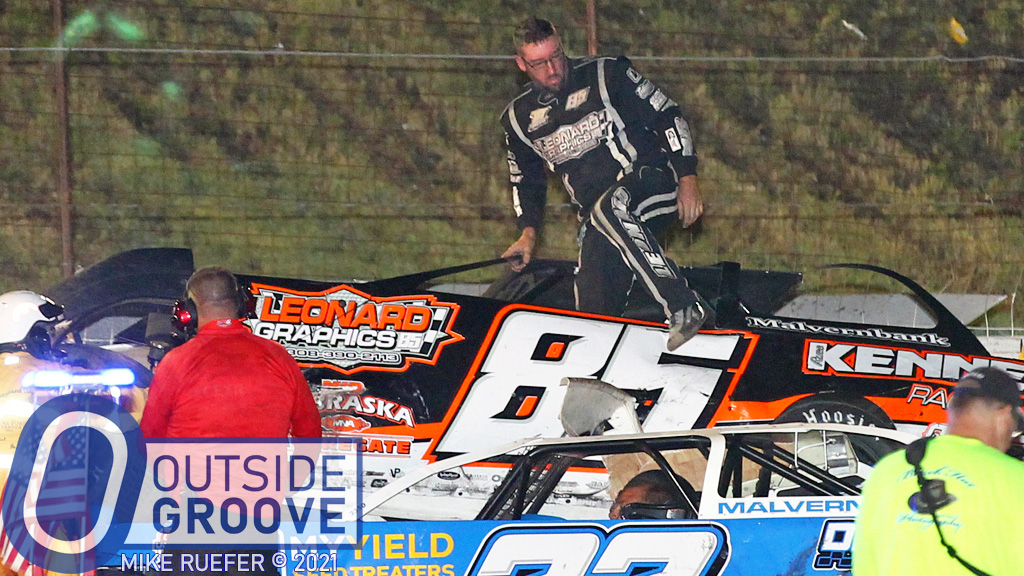 Josh Leonard had to climb his way out of the aftermath of an eight-car pileup last Saturday. The incident occurred during the feature for the Super Late Model Racing Series Hoker Trucking East-Malvern Bank West combination event at 300 Raceway in Farley, Iowa.

“The pack came off the corner on a restart, a few cars got together, one turned sideways, and there was nowhere to go,” said Leonard, 35, of Gibbon, Nebraska. “I got out [of my car] and saw two cars below me.”

Leonard’s car landed on top of the cars of Charlie McKenna, of Ames, Iowa, and Brian Kosiski, of Papillion, Nebraska. None of the drivers were hurt. Leonard sat in a ButlerBuilt full-containment seat, with a Hooker Harness five-point belt system. He wore a Simpson helmet paired with a HANS device.

“The good news is that I had no frame damage,” Leonard said of his car from Longhorn Chassis. “The bad news is that I needed front suspension, uppers, lowers, spindles, a steering rack, shocks, and a new set of headers. Total cost — about $5,000.”

Leonard has raced since 2005. He won three consecutive track championships at Mid-Nebraska Speedway in Doniphan (2011–13). Leonard also earned the 2017 national late model title for what’s now called the Crate Racin’ USA Weekly Racing Series. Other accolades include the 2019 track championship at I-80 Speedway in Greenwood, Nebraska.

Josh Leonard owns a graphic design business and manages Dynamic T’s Screen Printing and Promotions. He also owns his own late model. When he lost an engine this season, he had to borrow one to continue racing. He looks to return to the track next Saturday, September 18. Knoxville Raceway in Iowa will host an invite-only race for the Super Late Model Racing Series East and West series. It will serve as a support feature for the Lucas Oil Late Model Dirt Series’ Lucas Oil Knoxville Nationals.