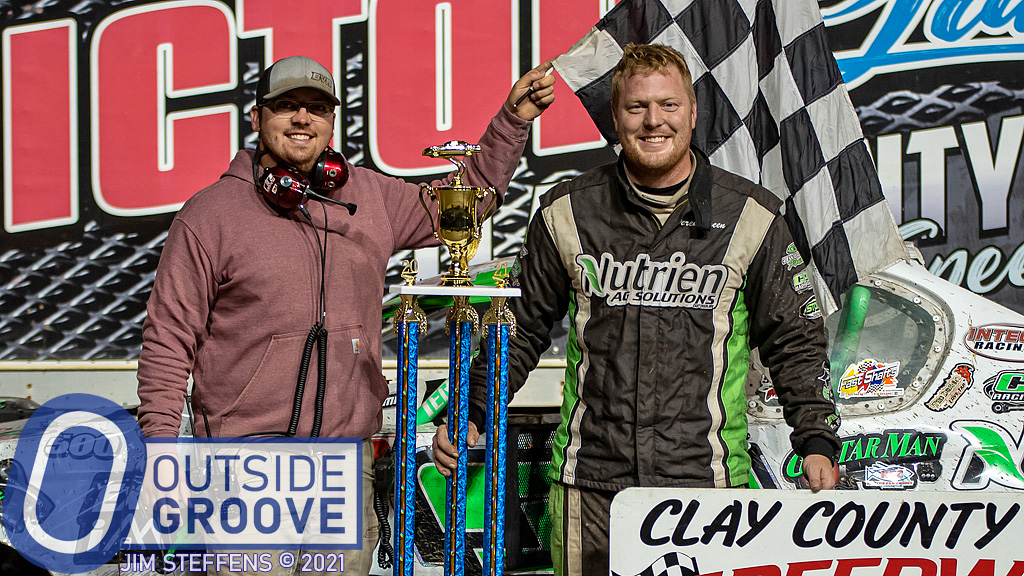 Derek Green, a veteran racer of 12 years, won his 100th IMCA stock car feature on September 14. The feat occurred at Clay County Fair Speedway in Spencer, Iowa. Combined with other sanctions and classes, Green has tallied a total of 152 feature victories. However, his greatest source of pride comes from scoring wins at big shows.

“We’re racing less weekly shows and trying to hit all the specials that pay $1,000 or more to win,” Green, 30, of Granada, Minnesota, said. “It is fun to race against the best of the best drivers in whatever region you travel to. We used to stay within three hours of home. This year we’ve raced the IMCA Lone Star Stock Car Tour [in Texas] and the Bristol Dirt Nationals [in Tennessee].”

Green raced at 20 different tracks this season. He manages to still frequent a trio of tracks — Fairmont Raceway in Minnesota (where he won the 2021 championship); Hancock County Speedway in Britt, Iowa; and Kossuth County Speedway in Algona, Iowa. By chasing bigger races, reaching victory lane becomes more of a challenge.

“A few years back, I won 17 and 18 features two years in a row,” said Green. “The last four years my winning ways have slowed down a bit as everyone has gotten faster. Setups are continuously changing. I feel better that I was able to get 12 wins this season.”

In addition to a hectic racing schedule, Green leads a busy life as a farmer. He raises 10,000 head of hogs and 1,200 acres of corn and beans.

For drivers looking for advice on how they can reach a milestone such as 100 IMCA stock car victories, Derek Green offers some advice.

“Keep striving to learn,” said Green. “Don’t be afraid to ask questions of the people who have more knowledge than you do.”