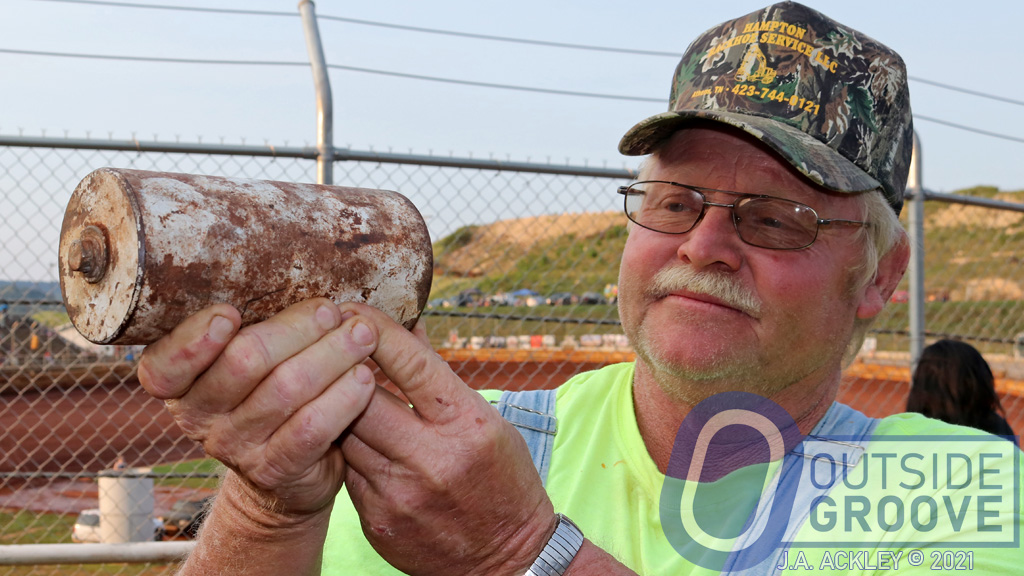 Mountain View Raceway co-owner Kelvin Hampton held up a piece of ballast during the drivers’ meeting on September 11. It came from an unknown source, but it definitively hit the car driven by Ruben Mayfield during the Valvoline Iron-Man Late Model Southern Series feature the previous Saturday at the Spring City, Tennessee, track.

“[The ballast] actually didn’t hit him,” said Beth Brakebill, spokesperson for Mayfield, of Lenoir City, Tennessee. “Thankfully, the window guard slowed [the piece of ballast] down. [The ballast] came in [the cockpit] and wedged in the steering wheel. [The steering wheel] wouldn’t turn and that’s what caused him to slam the wall. It bent a bunch of stuff on the front of the car.”

Mayfield walked away from the incident unhurt, thanks in part to the 2020 chassis from Stinger Race Cars by KCW.

At the aforementioned drivers’ meeting, an impassioned Hampton warned drivers that his staff will search cars for inappropriately mounted, painted, and marked ballast.

“I’d hate for something like that to kill somebody,” said Hampton. “I can’t see how that [ballast that hit Mayfield’s car] was mounted with something other than a piece of duct tape. The bolt in the end of it has never been off and there’s nothing tore or ripped off [on it].”

“We always consider safety a number one priority,” Tilley said. “We utilize any safety measures we can to keep our drivers, teams, and officials as safe as possible. In this instance, we were informed that debris from another car in another division came from the racing surface and hit a race car…. We check race cars in pre- or post-race tech for weights to be mounted properly and painted white, according to the rules.”

Hampton said he could not definitively determine the source of the ballast. Nevertheless, Hampton remains determined to prevent an incident like Ruben Mayfield endured from happening again.

“Ruben is as good a person as anyone I had ever met,” said Hampton. “It could have happened to anybody, but it could have killed a kid. We got a kids’ class — they’re 15 and under. I couldn’t live with myself if something flew off and hit one of them.”

In-car video footage of a piece of ballast hitting the car (around the 22:00 time mark) driven by Ruben Mayfield during the Valvoline Iron-Man Late Model Series feature at Mountain View Raceway in Spring City, Tennessee.