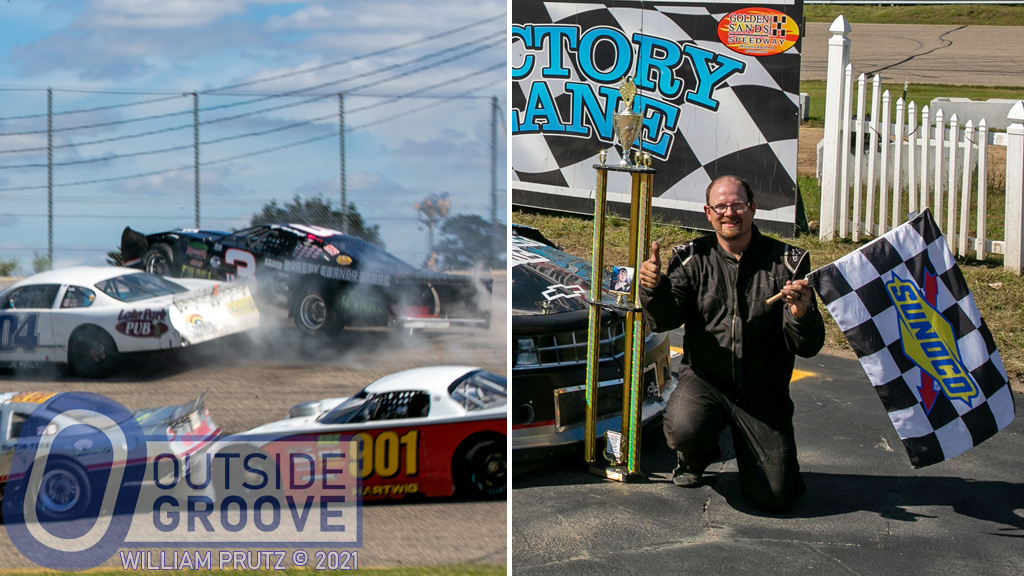 Dylan Wenzel had quite the comeback last weekend at Golden Sands Speedway in Wisconsin Rapids, Wisconsin. Despite a harrowing wreck during the feature, he stormed through the field to win the race with a chassis built in 1990.

Wenzel started the day by setting fast time in his first-ever visit to Golden Sands Speedway. He started eighth in the first of twin 20-lappers for the quarter mile late model class.

Six laps into the feature, cars in front of Wenzel made contact.

“I had nowhere to go,” said Wenzel, 40, of Fremont, Wisconsin. “My car got hit in the left front, went airborne, and off the track. The track is steep. There is a flat surface where the banking ends. My car came down violently, and it caught the upper edge of the track.”

Wenzel was not injured. He sat in a Kirkey full-containment seat, with a Simpson five-point harness. He wore a Roux helmet paired with a HANS device.

“It looked like mainly cosmetic damage,” Wenzel said after he exited his damaged car. “We took it to the pits and secured the body damage.”

He returned to the race at the back of the pack. He passed the eight remaining cars to take the win.

“I never had a race where I crashed, got out of the car, got back into it, and won,” Wenzel said. “As I drove, the car became looser and looser.”

After the victory celebration, his team discovered the crash damaged the oil pan, which was leaking. The mounting brackets for the suspension were also cracked. His six-person crew, which includes his wife, Tammy, and father, Rick, decided to err on the side of safety and scratched the car from the second feature.

Dylan Wenzel purchased the car at the beginning of the season. Under the modern-day Chevrolet Camaro body is a 1990 RanderCar chassis. With it, he won five at Wisconsin International Raceway in Kaukauna and finished fifth in points.

“Everyone asks why I bought such an old car,” Wenzel said. “I bought it because it was a very successful car, and several drivers won in it. For me, the car has everything I like in the right place, as far as the suspension goes. Older chassis don’t flex as much as new ones. The way it’s made and setup suits my style of driving.”