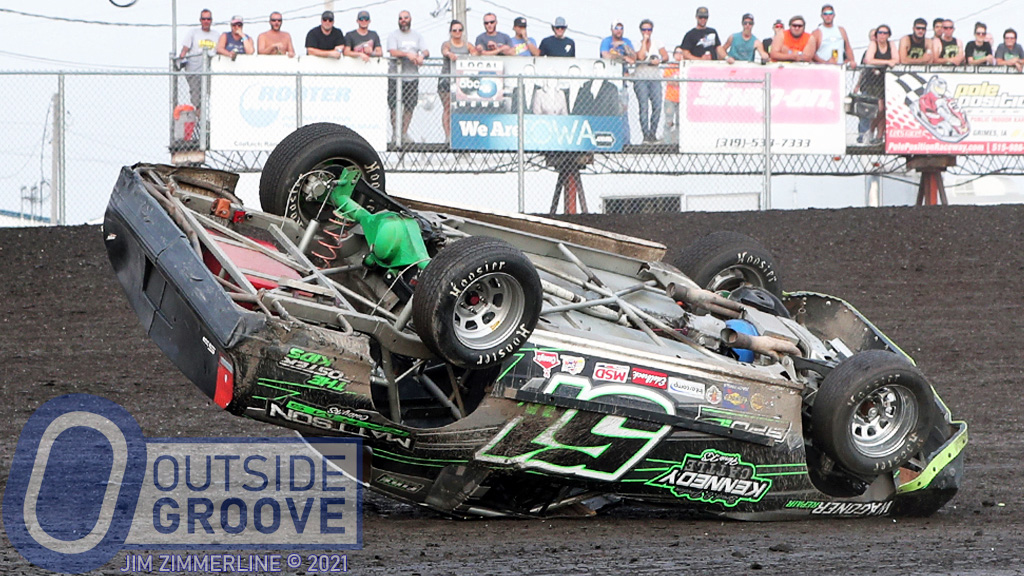 Stock car driver B.J. Wagoner said he lucked out with this roll. The incident occurred during the last chance race of the IMCA Speedway Motors Super Nationals at Boone Speedway in Iowa.

“I was lucky it was a soft landing,” Wagoner, an auto parts store manager from Colby, Kansas, said. “The car in front of me turned a bit. I hit him in the door, the guy behind me got my car in the rear, I spun, and the right rear dug into the track. It grabbed my car and dumped me.”

Despite the rollover, Wagoner incurred only sheet-metal damage to the car from Medieval Chassis.

“The worst part about the crash is that I was upside-down for a minute or so,” said Wagoner. “I wasn’t hurt, but it was awkward releasing my belts while I was upside-down. The safety crew helped me slide out of the car.”

Wagoner sat in an Ultra Shield Race Products full-containment seat, with a Simpson five-point harness. He wore a Simpson helmet paired with a HANS device. Wagoner and his car both survived the crash, which he is thankful for.

“It was good that my car wasn’t damaged,” said Wagoner. “I need it to be race-ready for championship night on Saturday.”

He sits only six points ahead of second-place Tathan Burkhart for the stock car crown at Rolling Plains Motor (RPM) Speedway in Hays, Kansas. B.J. Wagoner needs to finish seventh or better in the final feature to guarantee his championship.

“I really enjoyed it,” said Wagoner of promoting. “Walking away from that job was tough. Being a promoter takes a lot of time and effort. It was bittersweet, but at the same time we were ready for a break. Our son, Blaine, is in middle school and he, too, has shown an interest in driving. We’re going to focus on racing now.”