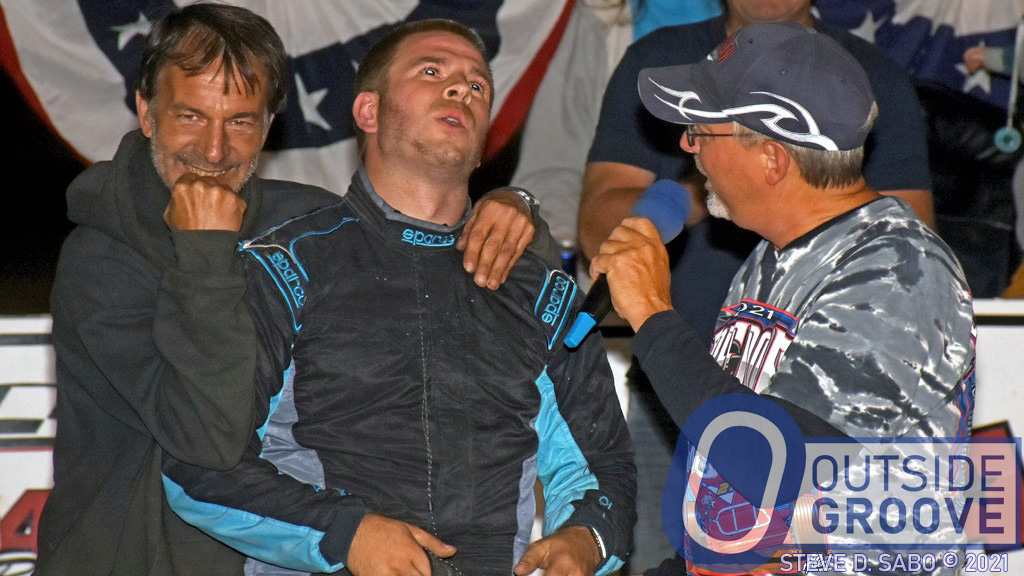 Sportsman racer Lex Shive (center) and his father, Burt (left), couldn’t help to express their jubilation after scoring their first feature win. It took them seven years of trying, but they finally did it. The milestone victory occurred last Saturday at Grandview Speedway in Bechtelsville, Pennsylvania.

“It was a surreal moment for us,” Shive, of Pennsburg, Pennsylvania, said. “So many times, we got close, but [we] never [earned] a win.”

While Shive raced motorcycles prior to competing at Grandview Speedway, he grew up at the dirt oval.

“The passion for racing was always there,” said Shive. “My grandfather and my dad took me to Grandview Speedway since I was a little kid.”

The transition from two wheels to four did not come easy.

“We struggled so much when we first started,” Shive said. “I had no driving experience.”

Tough times on the track did not deter Shive. He worked on bettering his program.

“We do our own [engine] assembly,” said Shive. “Just two weeks before our win, we blew up one of our engines. We had a short block [and] we scrambled to build a new engine so we could keep racing. We worked until 3 a.m., and then finished it on race day.”

Shive, who works as a realtor, won on a night when his sponsor, Hope Mortgage Team, also sponsored the race. They increased the winner’s share of the purse by $1,000. Several of his coworkers were also in attendance.

“To win with my sponsor and my Re/Max co-workers in attendance was really sweet,” Shive said.

With his first win under his belt, Lex Shive looks for his second this upcoming weekend. Grandview Speedway hosts the Freedom 38, a special extra-distance race on Friday, September 17.

“Winning has given us confidence,” said Shive. “They say the first win is always the hardest win to get.  We won and now we know we can do it again.”