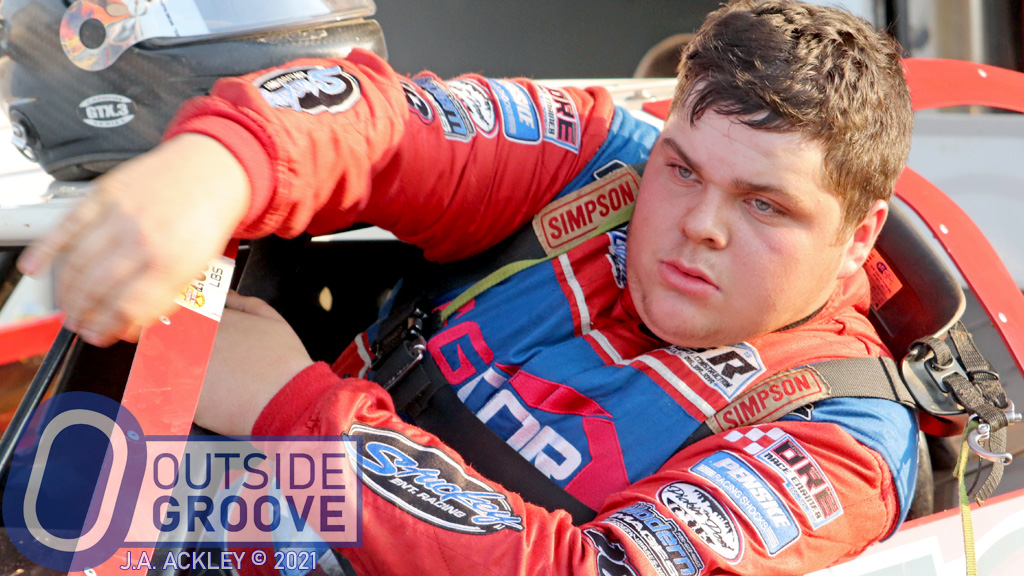 “The track conditions were treacherous,” said Seawright, who started fourth in the feature. “I knew there were faster ways [around the track] — I just didn’t want to use them until I had to. When we had that restart, I figured if I could run it hard one lap or so, it wouldn’t hurt my car that much.”

At the time of the lap-13 restart, Seawright had to pass two accomplished veterans to reach the top spot. He took second-place from Dale McDowell shortly after the race resumed. Seawright then overtook leader Donald McIntosh on lap 15.

“I knew there was grip right through them ruts,” Seawright said. “I didn’t want to run through them, because it’s rough on the car. But, there was so much traction [through the ruts] that you could get two to three tenths a lap quicker than what you could [by running] anywhere else.”

The fast way around the oval came at a cost. Seawright said he had to replace some suspension parts after the race. It also knocked the rear deck out of the car. After the race, Seawright’s team discovered another issue.

“It messed up some spark plugs [and] one of the spark plug wires actually came off,” said Seawright. “I guess a clod of mud hit it. But, the motor was running good. Maybe we need to take a spark plug wire off every week.”

Fortunately for Seawright, the 1/3-mile, typically slick Boyd’s Speedway doesn’t reward those with large power plants under the hood. However, he didn’t use one of the largest engines in the field, either.

“That’s the smallest motor I got,” Seawright said of his engine. “It’s just a 430 [cid] standard-bore [engine]. We’ve got wide-bore motors, but we probably wouldn’t be any better.”

Seawright, 17, of Rainsville, Alabama, has raced stock cars since age nine, starting in the pony stock class. He progressed to 602 late models and then 604s. This year marks Seawright’s third season focused on the super late models. In his younger years, Seawright dreamed of racing with the top drivers of dirt racing.

“I’ve got a lot of wins,” said Seawright, “but none [of those victories included] beating guys like Dale McDowell. [McDowell is] one of my racing heroes. I’ve been watching him since I started racing. [As a kid,] I was like, ‘Maybe, one day, I can race with him.’ It’s awesome that I can compete with him and win.”

“I’d rather race like that [with rough track conditions] than [the track] be locked-down, one-lane,” Seawright said. “We can replace car parts. I just like racing hard and having fun.”