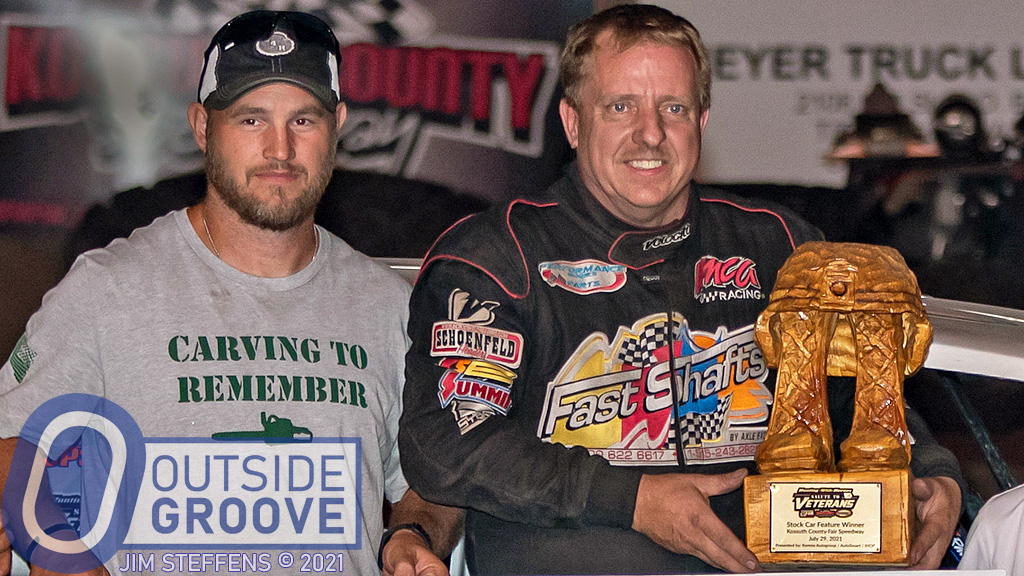 Two weeks ago, Kelly Shryock reached the milestone of 500 feature victories with little fanfare. However, the chainshaw-carved trophy from Logs4Heroes for win No. 505 carries special meaning for him. Shryock earned that first-place finish at Kossuth County Speedway in Algona, Iowa. It came during the IMCA stock car portion of the Hunting with Heroes Salute to Veterans miniseries. (See “Salute to Veterans: Three-Race Series This Week”.)

“That trophy [from the recent win at Kossuth County Speedway] is going to be around forever,” said Shryock, who has donated hundreds of his trophies to the Kids Club at Deer Creek Speedway in Spring Valley, Minnesota. “Winning a Salute to Veterans race was emotional for me. My car honored 60 soldiers who lost their lives in the Iraq war. Their names were on both sides of my car.”

Shryock was touched when people came up to his car, pointed to a name, and told them they knew that soldier.

Shryock didn’t publicize his 500th win. Bob Patterson, a schoolteacher from Mason City, Iowa, has kept stats on Shryock since he began racing in 1984. His wins have come not only in IMCA modifieds and stock cars, but also dwarf cars, southern sport mods, and USMTS- and USRA-sanctioned events.

“I have the trophy from my first win and my 400th win, and other significant wins,” said Shryock. “I take no wins for granted.”

This season, Kelly Shryock has racked up 17 feature victories.

“People ask me if I am going for 600 wins,” said Shryock. “Who knows? I hope we are not done. I still haven’t figured out what to do when I grow up.”