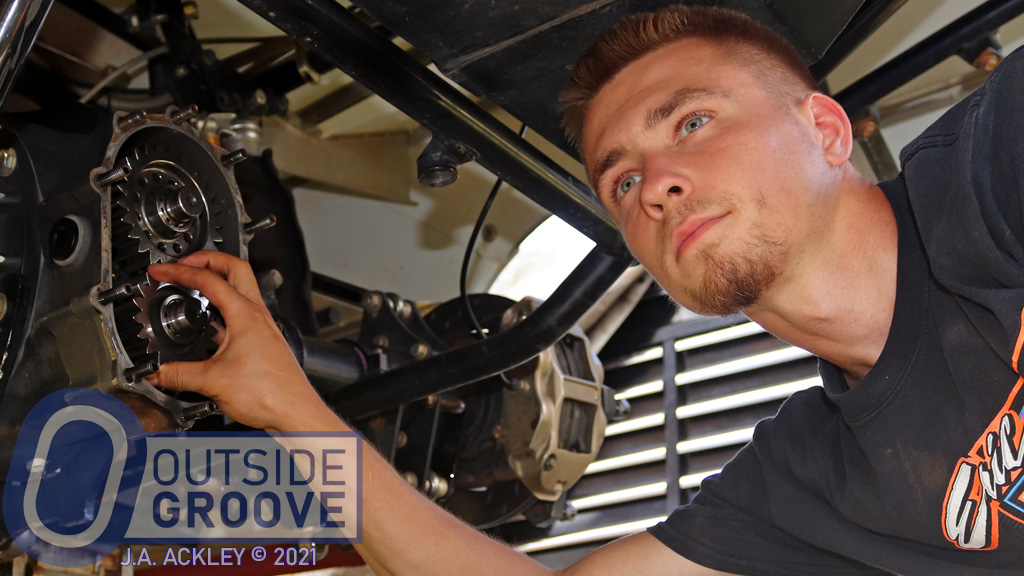 While Austen Ziacik periodically helped on late model teams near his home, nothing could prepare him for his stint as a crew member on the Rum Runner Racing team, with driver Cody Overton, for the grueling Schaeffer’s Oil Southern Nationals Series. The circuit hosts 12 races in the span of nearly two weeks during the hottest time of the year in the South.

Austen Ziacik grew up in Sarver, Pennsylvania, home of the famed Lernerville Speedway. He raced go-karts as a kid. Ziacik also lent a helping hand whenever his father’s friend, Todd Bachman, needed it on his late model or Jonathan Davenport strolled into town. It was through Tyler Breashears, a former crew member for Davenport, that Ziacik connected with Overton at Lernerville.

“I went up there with my crate car, and I was all by myself,” said Overton, of Evans, Georgia. “Tyler came over with his friends, and then [Austen] walked in [and asked,] ‘Hey, do you need any help?’ I said, ‘Yeah.’ Then, this deal [with Rum Runner Racing] came about, and I was like, ‘I’m calling him. I know he could do it.’”

In May, Ziacik graduated with a B.S. in mechanical engineering from Robert Morris University in Pittsburgh, Pennsylvania. He hadn’t found a job yet, thus he was available.

“I talked with my parents and realized [helping Cody on the Southern Nationals Series] was going to be much better than sitting at home,” Ziacik, 21, said. “It was going to be a good experience.”

Helping a local driver is one thing. Working on a professional team racing 12 events in 15 nights is another.

“It’s a lot more preparation and work from race to race,” said Ziacik of the differences between racing locally and in a series. “The majority of the stuff I’m doing here, I had never had the opportunity to do back home. [Such as] cutting tires, buffing them — I knew how to do that, but I never got to do it myself. It was nerve-wracking knowing I was going to be the one doing it, but it’s gone real smooth. I’m enjoying it.”

Ziacik polished his skills thanks to the crew chief — and unofficial professor of the Rum Runner Racing team — Harold Holly. Some describe the 2000 NASCAR Xfinity Series champion crew chief as “intense,” “tough,” and “old-school,” but Ziacik said he learned a lot from him. Likewise, Ziacik impressed Holly.

“It’s gone smooth as it possibly can,” Holly said. “It’s the first time he’s done this. He’s come in, he’s adapted, he stays on top of his deal, so I’d give him an A+. It’s gone well enough that I’m trying to convince him to move.”

With Holly and Ziacik as his crew, Overton currently sits second in points for the Schaeffer’s Oil Southern Nationals Series. Prior to the series, Overton never ran a super late model. Ziacik found the most difficult part of the series was not directly related to the car or racing.

“This heat has really killed me — I’m not used to it,” said Ziacik, referring to days on the series that regularly reach into the 90s, with temperatures feeling as if it were in the 100s. “I like it hot, but Pennsylvania hot compared to Southern hot are two different things. I get wore out and the next thing you know it’s two o’clock in the morning, you’re loading everything up, going to the next track, and getting up early to do it all over again.”

As far as the future, both Holly and Overton would love to work with Ziacik again. Austen Ziacik remains open to whatever opportunities may exist over the horizon.

“I fly home on Monday … and I might have a job interview on Tuesday and get a job doing that ,” Ziacik said. “I would like [a career] in racing, but if not, I can just keep being a fan and keeping a day job.”