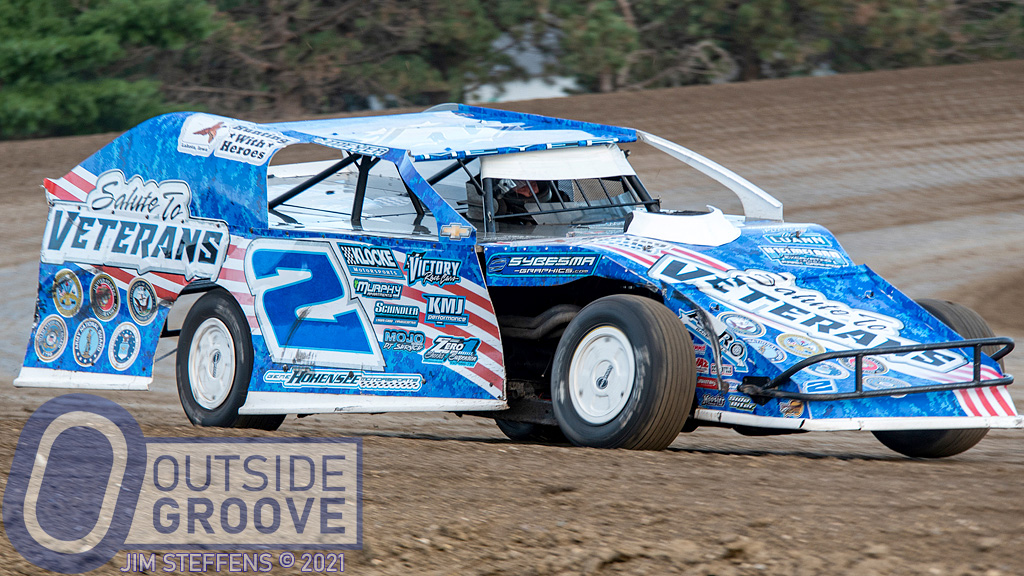 This Wednesday, the three-night, Iowa-based Hunting with Heroes Salute to Veterans series begins. It offers more than $85,000 in purse money for the IMCA-sanctioned divisions of modifieds (where Nick Meyer, of Whittemore, Iowa, races with the organization’s colors), stock cars, sport mods, and hobby stocks. More importantly, it presents more than $100,000 in food, drinks, prizes, and gifts for veterans. Plus, veterans and their widows will receive free admission to the events.

The program’s roots started with Bernie Becker, of Lakota, Iowa, and his son, Jason Becker, of Raleigh, North Carolina. They helped veterans reconnect with society through hunting trips. That then expanded to include a racing night and now to three days of racing at three different tracks.

The Beckers formed the non-profit organization, Hunting with Heroes, 11 years ago. It’s run entirely by volunteers, who take wounded warriors on hunting trips. Many of the veterans have received the Purple Heart and served in the Afghanistan and Iraq.

“We gave the veterans a chance to be outdoors, enjoying camaraderie from the patriotic residents of the Midwest,” Jason Becker said. “The first year we had a handful of hunters and hosted 200 local vets at a banquet. Then, we got involved in sponsoring a race event.”

This year, the event expanded into a series based in Iowa. It begins on Wednesday, July 28 at Clay County Fair Speedway in Spencer. The next day, Thursday, July 29, they travel to Kossuth County Speedway in Algona. It wraps up on Saturday, July 31, at Boone Speedway.

“At the races, [veterans and their families] will see and feel the appreciation they deserve,” said Jason. “One of the greatest things about our charity is that it embraces diversity. We’ve hosted Muslim interpreters, and veterans from every race, creed, and religion. Our arms are open to everyone.”

The Beckers emphasized that the Hunting with Heroes Salute to Veterans series welcomes all veterans and their families. This concern comes in the wake of a recent controversy at Kossuth County Speedway, where an announcer made comments with racial overtones, which made national news. Becker said that has nothing to do with their event.

“Comments like those can bring out the worst in people,” Jason said. “This week will be a huge hit. We stay out of all that controversial stuff. We absolutely welcome every veteran, period. The races will be a chance for all to connect.”