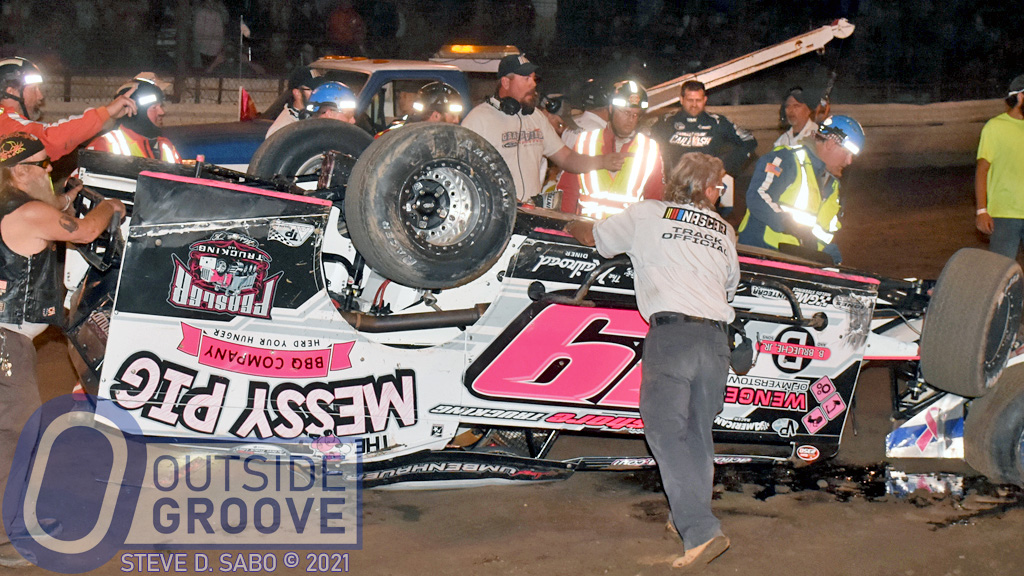 The modified driven by Jared Umbenhauer landed upside-down during a feature-race pileup at Grandview Speedway in Bechtelsville, Pennsylvania. When his car came to a rest, he began to panic. Umbenhauer thought he was trapped.

“I popped my belts and tried to get out [but] I was stuck,” Umbenhauer, of Richland, Pennsylvania, said. “I thought I was going to die in there. All I kept thinking about was what happened last time.”

Umbenhauer previously rolled over in 2018. The accident triggered a fire.

“I saw fuel running out of the fuel cell,” said Umbenhauer of the 2018 incident. “I got out with no time to spare. Seconds later, flames fully engulfed my car.”

Fortunately, this time no fire ensued.

“The cars bunched together after a restart,” Umbenhauer said. “I was going full speed into the pile and being pushed from behind. The right front of my car snapped off from the initial impact. The frame dug in and it rolled upside-down.”

After hanging upside-down for a few seconds, Umbenhauer released himself from his belts.

“I fell down between the seat and roll cage,” said Umbenhauer. “I had no vision of an escape route. So, I took my helmet off [and] I tried to crawl out. The track crew pulled me through the narrow space between the seat and the body panels. It felt like a long time, but, in reality, it was about a minute.”

Umbenhauer emerged from the crash uninjured. He sat in a Kirkey full-containment seat, with a five-point harness from Crow Safety Gear.

“The initial impact was hard, and the stop was abrupt,” Umbenhauer said. “The belts did their job.”

He wore a Bell helmet, but no head-and-neck restraint.

“After the first rollover, I felt that a head-and-neck restraint would hinder my escape,” said Umbenhauer, who works at BFP Specialty, building bodies for race cars.

Jared Umbenhauer sent the car, a 2018 chassis from Bicknell Racing Products, to S&S Speed Center for repairs. In the meantime, he’ll drive his father Tom’s modified. He currently sits third in points at Grandview Speedway.

“Two months ago, I won in my dad’s car the second time I ever drove it,” Umbenhauer said. “Last weekend was my first DNF this season. The other top drivers had a bad week, too, so I didn’t lose too much ground. The chase is back on this weekend.”

Outside Groove Note of Transparency: Corrected the time of the rollover to the feature event (2021-08-03).