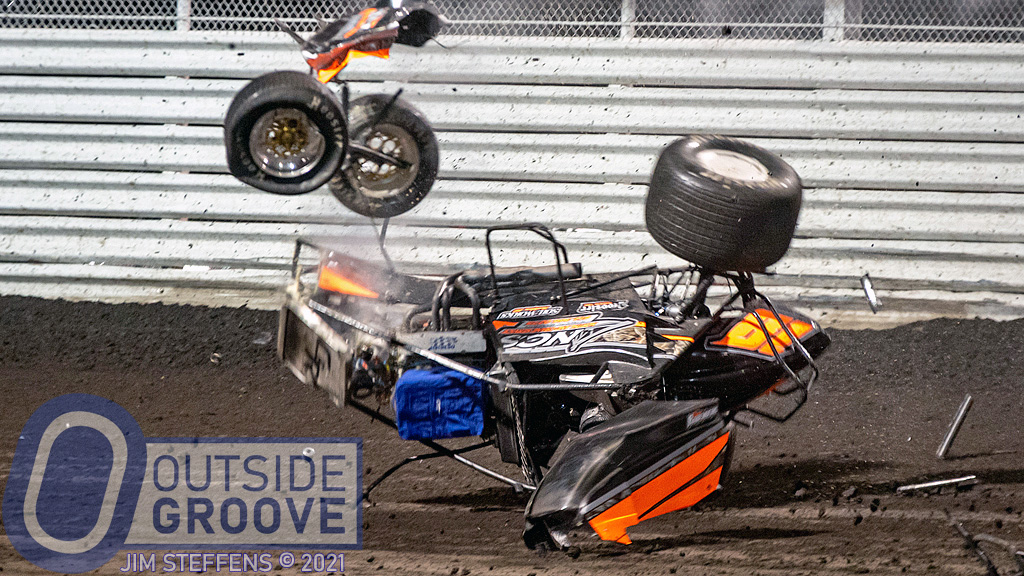 Tyler Rabenberg took a spectacular ride in a 360 sprint car and came out of it with only a scraped knee. The incident occurred during the Midwest Sprint Touring Series (MSTS)/Midwest Power Series at the Jackson Motorplex in Minnesota.

Rabenberg started 23rd in the feature and was moving into 18th when the calamity occurred.

“The car in front of me hit the berm and started fishtailing,” Rabenberg, 15, of Princeton, Minnesota, said. “I caught his car’s right rear with my left front, and my car went up and over into the wall. I started flipping over and the only thought that flashed in my head was that my car was being destroyed and it was going to be expensive to repair.”

The track safety crew swiftly arrived at Rabenberg’s car after it stopped. While the car was still upside-down, they checked on Rabenberg. When they determined he was okay, they flipped it over, with Rabenberg inside. He left the wreckage under his own power.

“I pulled his belts tight before he went out on the track,” Craig said. “The cage was intact and did its job. It had the extra safety bars initiated by the World of Outlaws and now in all of cars that race in these series. We had the best safety equipment we could buy and it paid off. My son walked away from this wreck.”

While Rabenberg was okay, his car was not. The Rabenebergs said the wreck totaled 2018 chassis from Maxim Racing. They sent the engine back to L.L. Woodke Engines and the rear end to DMI for inspection. Now, they’re looking for another car as Tyler Rabenberg hopes to return to the races this weekend.

“I’m excited to get back out there,” said Tyler. “We’re going to see a car today.”