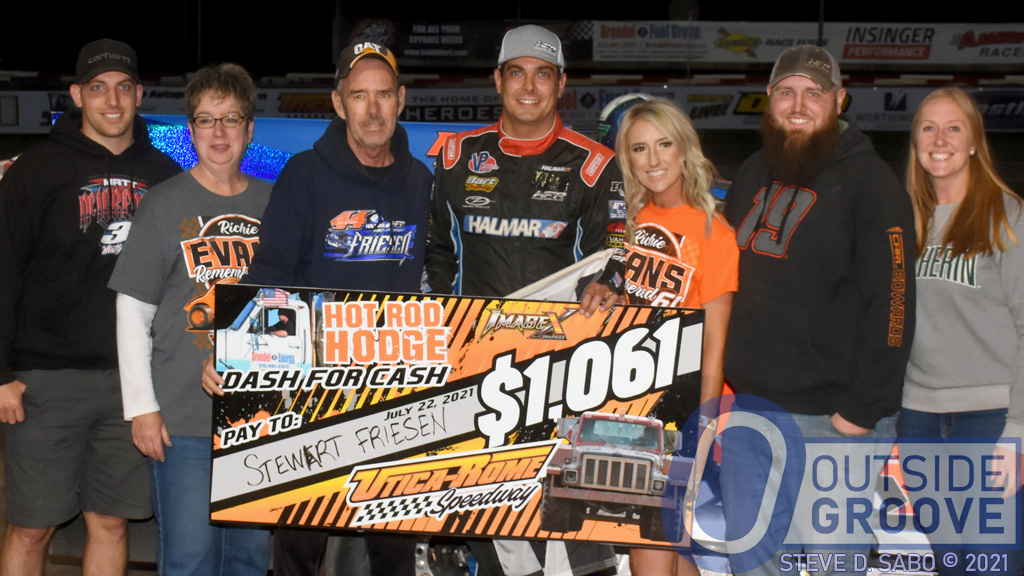 He may have never steered or owned a race car, but Tim “Hot Rod” Hodge (pictured left of driver Stewart Friesen) has been an integral part of the racing scene. For the past 14 years, he drove the packer truck at Utica-Rome Speedway in Vernon, New York. When doctors diagnosed Hodge with stage IV stomach cancer, his family sprung into action. They named last week’s Short Track Super Series’ dash for cash in his honor. Friesen won the “Hot Rod Hodge Dash for Cash,” bringing Hodge to tears as he stood in victory lane with family, friends, and Friesen.

“The first thing Stewart asked me is if I still had his old door panel hanging in my camp house,” Hodge, of Oriskany Falls, New York, said. “I sure did, and we talked a bit about old-time stuff. Since he went to [NASCAR Camping World] Trucks and has been traveling to big dirt modified events, I hadn’t seen him much.”

“[Treating the cancer with chemotherapy] was all they could do, and I am still being treated,” said Hodge. “Luckily, I am still here to enjoy family, friends, and racing.”

Son Timmy, daughter Dylanne, and wife, Jolee, planned the surprise race for Hodge. Timmy gave his father the nickname “Hot Rod” because of the way he drove the packing truck at the track. Jolee is one of the most-liked employees of the speedway — working years in the payout booth after the races. Dylanne organized and publicized the event. The family approached the speedway’s promoters, Brett and Heather Deyo, about having the race.

“The Deyos have been so good to me,” Hodge said. “I can hardly walk. They let my son bring his pickup in the pits so I can sit and watch the races from there.”

Friesen gave the big presentation check to Hodge to hang in his camp house next to the door he had given him back in 2010.

“I was driving for Tom Cullen back then, and Tim would show up at Cullen’s golf course, where he had a shop across from the clubhouse, offering to help,” said Friesen. “Tim has always helped people. He is a true race fan and all-around good guy — a friend of the sport.”

Tim “Hot Rod” Hodge kept his sense of humor, even in tough times.

“When I got to victory lane, I told Stewart that I had wished his wife, Jessica, had won the race,” Hodge said.