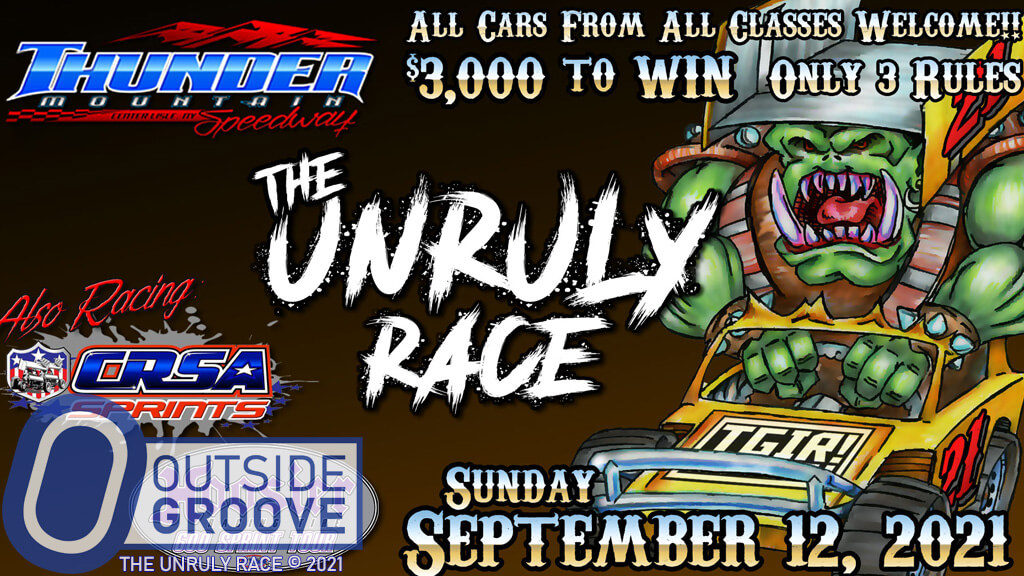 If you’re tired of a bloated rule book, The Unruly Race may be a breath of fresh air. The event scheduled for Sunday, September 12, at Thunder Mountain Speedway in Center Lisle, New York, boasts of three rules. That’s it.

More specifically, the rules are as follows:

“I love the outlaw stuff,” said The Unruly Race promoter Nathan Stevens, of Binghamton, New York. “I’m not a fan of how the race cars have become more and more like each other, with no creativity at all.”

Stevens believes oval-track racing’s rules have not kept up with the times.

“[With] these 40- to 50-year-old rules, we don’t see modern cars anywhere [in oval-track racing],” Stevens said. “You don’t see fuel injection in anything but the four-cylinder class. We’ve never seen turbos and superchargers, which is a large percentage of the performance industry.”

Plus, Stevens contends the rules actually cost racers more in the long run.

Admittedly, Stevens said the rules for The Unruly Race may seem vague, in particular the safety one, but that’s by design.

“The car has got to be safe — and I’m leaving it general like that,” Stevens said. “It’s got to be up to similar standards as to what a street stock would be — no enduro-type cars. If it remotely seems unsafe, contact me. Because if you show up and it’s unsafe, I’m not going to let you run.”

Stevens expects to attract a variety of cars. The possibilities seem endless.

Sprint cars? Sure, if you can safely bolt enough weight to one.

Center-steer modifieds? It’s certainly within the realm of possibility.

Electric cars such as a Tesla? Legal.

However, Stevens anticipates more conventional race cars, with some modifications.

“Most of the cars will be street stocks, factory stocks, because of the DOT tires and the 3,000-lb. weight rule,” said Stevens. “There are no engine, chassis, and body rules. If you want to show up with 15-foot side panels with the car, sure.

“I got people who want to run front-wheel-drive four-cylinders. If all the cars are lined up on the bottom of the track, a four-cylinder might drive around the top and do pretty good.”

If The Unruly Race is a success, Stevens said it might spark more events of the same concept.

“I have a huge goal of making a series out of this, and a sanctioning body,” said Stevens. “I’ll grow the rules a little bit, but only if it’s necessary.”