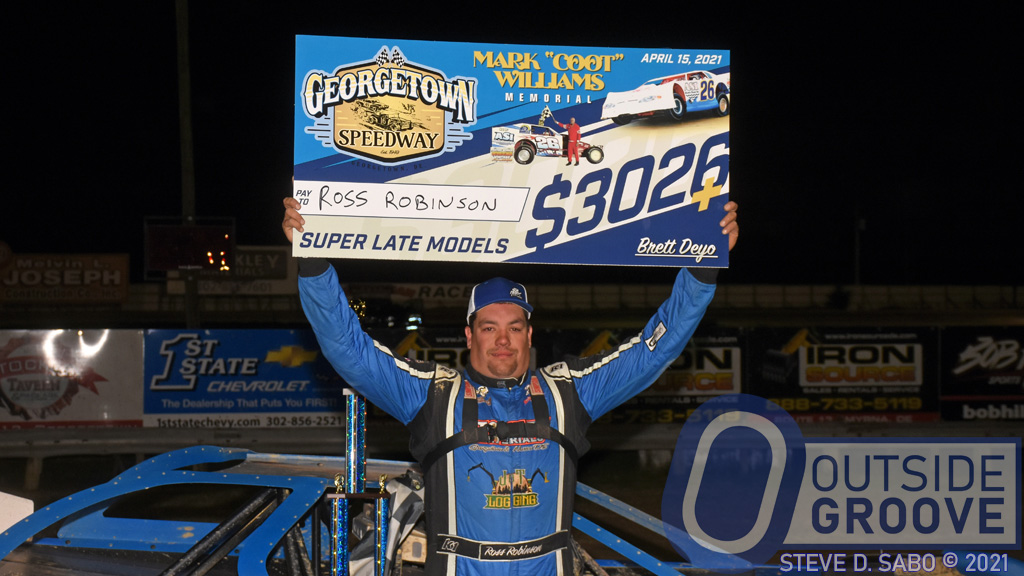 Ross Robinson kept his late cousin in mind as he won the Mark “Coot” Williams Memorial held in his honor. The emotional super late model win occurred at Georgetown Speedway in Delaware.

“Coot would randomly pop into my mind as I drove, especially when there was a late restart,” Robinson, 31, of Georgetown, Delaware, said. “You wouldn’t be able to print what he’d be saying to me. His upbeat personality was always an inspiration to me.”

Robinson drove Williams’ vintage modified in 2018 after his six-year battle with cancer rendered him unable to steer his race car. Robinson won the first night out and proceeded to string together a total of nine consecutive wins.

“He was on cloud nine in 2018,” said Robinson of his car owner. “He had to use a walker, and eventually a wheelchair, but each time we won it seemed to bring him new life.”

Williams lived five houses away on the same street Robinson resided on — just a mile away from Georgetown Speedway. He served as a mentor and inspiration to Robinson, who was some 20 years his junior.

Williams’ sons, Mark Jr. and Luke, collaborated with Georgetown Speedway promoter Brett Deyo to host the first event in 2019. It did not occur in 2020 due to the Covid-19 pandemic.

“I wanted to win the memorial so badly, for obvious reasons,” Robinson said. “It was a great night, one that meant a lot to me and everyone whose lives were touched by Coot.”

Mark “Coot” Williams, 54, passed away at his home on October 23, 2018. More than two years later, his spirit was alive the night of his memorial.

“His personality and outlook on life will never be forgotten,” said Ross Robinson. “He stared death in the face, never getting sad or down. He was always upbeat, and he made everyone around him smile and laugh.”