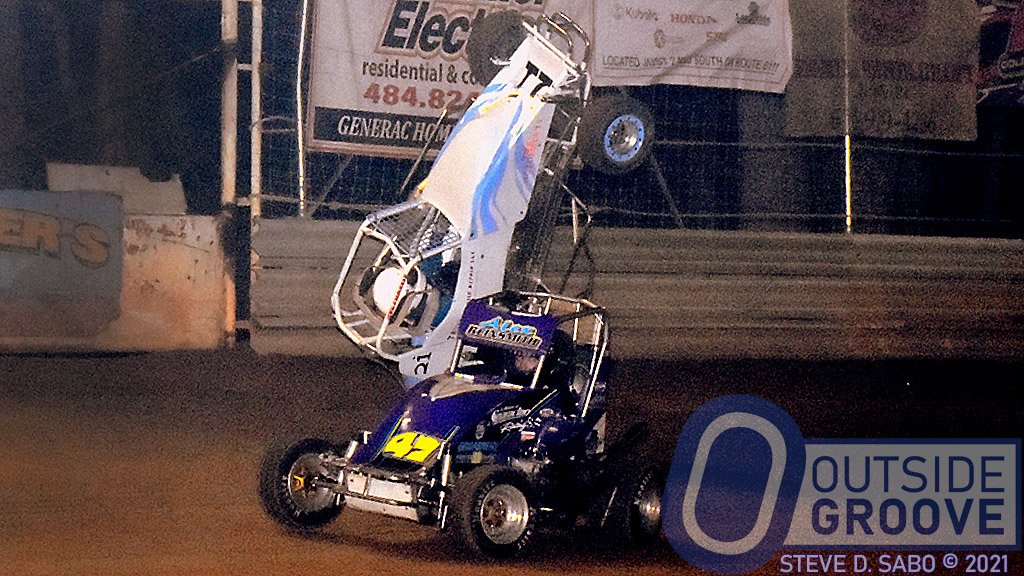 Robby Swavely didn’t immediately know the extent of his injuries after this crash last Wednesday. He hit the backstretch wall head-on at full speed during the 270 micro sprint feature at the Shellhammer Dirt Track in Shoemakersville, Pennsylvania. The impact caused his car to flip.

The next day, the 16-year-old returned to high school, not expecting any injury.

“I opened my computer at school, and when the light from the screen hit me, I blacked out,” Swavely, of Boyertown, Pennsylvania, said. “I immediately went to see a doctor with my parents. The doctor said I had a concussion and it would probably take a couple of weeks to heal. He told me to get as much rest as I could, and not to read or look into bright light.”

Swavely sat in a Kirkey full-containment seat, with a Crow Safety Gear five-point harness. He wore a helmet from Speedway Motors, a Simpson neck collar, and Simpson arm restraints. He purchased the full-containment seat due to Bridgeport Motorsports Park in New Jersey requiring it. Bridgeport also requires head-and-neck restraint systems, but Swavely opted for a Simpson neck collar instead at Shellhammer.

“I wouldn’t have had that seat if it weren’t for the Bridgeport rules,” said Swavely. “That seat, with the Crow harness and Simpson arm restraints, kept me from getting badly injured.”

His car from RTS Chassis only incurred minor damage. The crash broke a W-link and rear radius rod, but did not hurt the axles. Swavely said he ordered the parts he needs for his micro and will be back on the track once he recovers from his concussion.

Robby Swavely initially wanted to race motorcycles three years ago. However, his parents felt they weren’t as safe as a car. Nevertheless, Swavely felt the micro sprints provide a good place to learn, especially with his future aspirations.

“I knew people in the sportsman and modified divisions, which is where I want to eventually race,” Swavely said. “I had the money and opportunity to buy a micro and that is exactly what I did. I’m having fun. It is a lot cheaper to race than a big car, and I will move up to a sportsman next.”