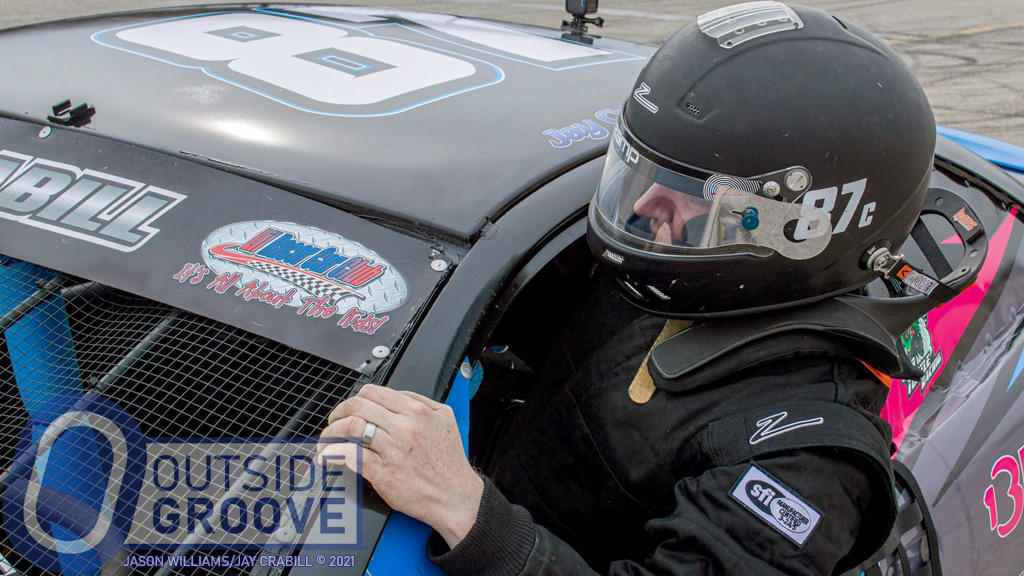 All that Jay Crabill has left of his personal safety gear are memories and photos such as this one. At some point last week, a thief stole the equipment he had purchased during the off-season.

“I’m currently borrowing a Suburban from a friend of mine,” said Crabill. (See “Jay Crabill: iRacer Uses Stimulus Check for Race Car” for our previous story on him.) “It was parked [at the apartment complex I live at in Cedar Rapids, Iowa,] on Monday, and that’s the last time I looked at it until Friday. I was getting my race car ready, and I had remembered it rained on Saturday [after the enduro race at Hawkeye Downs Speedway in Cedar Rapids, Iowa]. I was like, ‘Oh, man, I wonder if my fire suit is still wet.’ I went to go look at it, and nothing was there.”

That “nothing” included his Zamp Racing fire suit, helmet, gloves, and shoes, as well as his HANS device. His helmet carries his car number 87c. Crabill said the bottom of fire suit’s pants were roughed up from walking on them, as they were too long. Stealing distinctive equipment for a niche purpose may seem strange, but the mystery goes even deeper.

“I find it suspicious that my helmet, HANS, fire suit, gloves, and shoes, and RACEceiver were missing,” Crabill said, “but all my tools, power tools, spare tires remained.”

Crabill said he typically locks his vehicle’s doors, but he founded them unlocked when he discovered his gear missing. The security system installer by trade acknowledges he made mistakes that left the equipment open to theft.

“I usually have everything in my bags, but after the race on Saturday, it was raining,” said Crabill. “I just threw everything in there, all over the SUV. All my gear was separate.”

Silver Lining to the Dark Cloud

With no safety equipment to use, Crabill announced what had happened on his personal Facebook page.

“I knew a lot of people were going to be expecting me, so I made a post to let everyone know I wasn’t going to be there,” Crabill said. “I wasn’t making it to get any handouts. But, holy moly, what a reaction. My phone was blowing up for the rest of the night, with people making offers for gear they have to loan, give me, or sell.”

Thanks to a friend, Crabill raced the same night he found out his gear was stolen.

“One of my buddies was on vacation in Florida, Curt Gibbs,” said Crabill. “He called me and said, ‘Hey, here’s my garage code. Go to my house right now and go get all of my stuff.’ We did that and we were able to race CJ Speedway [in Columbus Junction, Iowa].”

Crabill then competed the following night at Independence Motor Speedway in Independence, Iowa.

“We got a career-best finish of P2,” Crabill said, “which really took the sting out of the whole situation. I had my dad’s old fire suit on and I had my old pair of shoes, which were falling apart. I had that and my loaner helmet and gloves [from Gibbs].”

“I had a sponsor who bought a new set of gloves,” said Crabill. “We will probably be able to track a helmet down. I had another sponsor offer $100, which will cover our RACEceiver. At this time, we’re probably good. It will just be a matter of replacing our fire suit, when I have the money, and getting a HANS. In the short-term, we can race.”

Crabill said he takes his safety seriously, which made the situation even more heartbreaking.

“My HANS was my biggest loss personally,” Crabill said. “I was really proud of myself of getting that thing.”

“There are a lot of good people out there — that’s the nice thing to know,” said Crabill. “When you’re down on the ground, bleeding, there are people out there that are going to pick you up.”