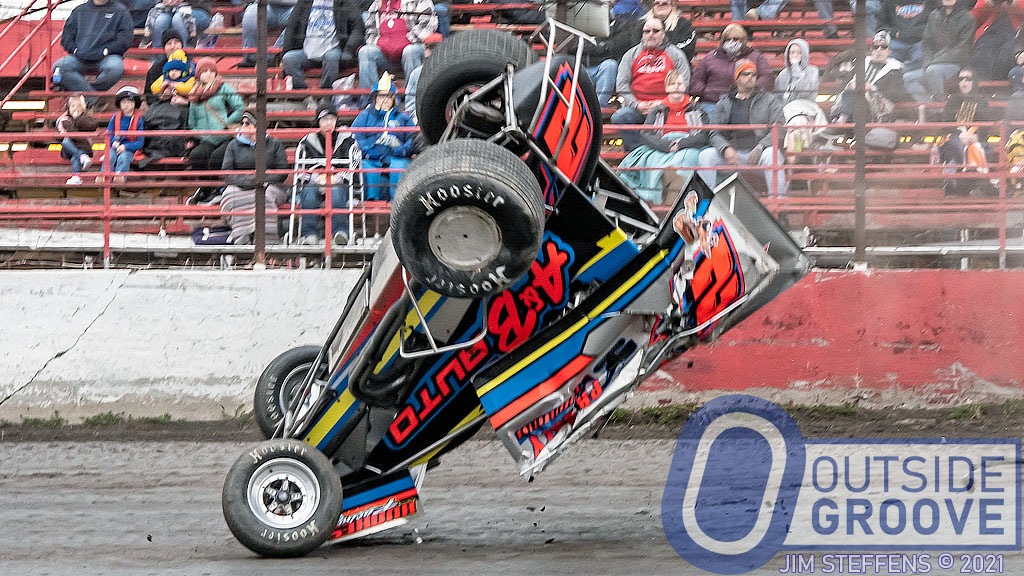 “I was the victim of an out-of-control lapped car midway through the feature,” Ballenger, of Harrisburg, South Dakota, said. “I was getting into traffic coming out of turn four and saw a car spin to the bottom of the track. I checked up and [that driver] stayed on the gas, came across the track, and T-boned my car.”

Then, Ballenger’s car hit the concrete wall and started flipping. Fortunately, he walked away with only bruises from his belts. He returned to his day job as an auto technician on Monday.

Ballenger sat in a ButlerBuilt Professional Seat Systems full-containment seat, with a Crow Safety Gear five-point harness. He wore a Bell Racing helmet, with a NecksGen head-and-neck restraint system. Ballenger did not use arm restraints. He had nothing but praise, not only for his safety equipment, but also for the track’s safety crew.

“The safety equipment I had did a great job,” said Ballenger. “The track’s Med Star Dirt Track Rescue Team [of Brandon, South Dakota] was outstanding in checking me to make sure I was okay. I always feel safer when a track has Med Star on scene — they are fantastic.”

His new IMCA RaceSaver sprint chassis from Triple X Race Co took the brunt of the crash, but is easily repairable. The wreck damaged bolt-on parts in the front and the rear. That included a bent right-front torsion tube, both wings, and the car’s body.

Dusty Ballenger plans to fix the car in time to return to action this weekend. He’ll next race the Spring Fling at Crawford County Speedway in Denison, Iowa, on Friday, April 23.